FRIDAY FEATURE: LEGO Masters Australia winner Cade Franklin have just shared his latest creation on Instagram (@arcade_bricks) and it is Harry Potter themed! Over the years I’ve seen quite a few impressive LEGO chess games, but I think this is my new favourite. Here are the full set of photos, but be sure to follow Cade on Instagram as well!

Wizard chess is often played by Harry and Ron in the Gryffindor common room. Harry was fascinated my the moving pieces (still getting used to the magical world) and Ron was a particularly skilled player, which helps them when going through the different challenges to get to the Philosophers Stone in the first book.

But here is another magical chess game. LEGO Masters Australia winner Cade Franklin this weekend posted pictures of his latest creation on Instagram (look up @arcade_bricks and be sure to follow him). He was inspired by a fellow LEGO Masters winner Henry Pinto’s (@the_lego_dark_knight) marvelous Minecraft chess table and decided to make his own chess table – and luckily picked Harry Potter as theme.

With Cade’s chess board, you can play the Order of the Phoenix fighting Lord Voldemort and his death eater army. Let’s have a closer look at the two sides.

The Order of the Phoenix

First up are the good guys. Look at that lineup!

The two rooks are represented by Hogwarts Express and the Weasleys’ flying car, which are both based on their appearances in the LEGO Dimensions sets. 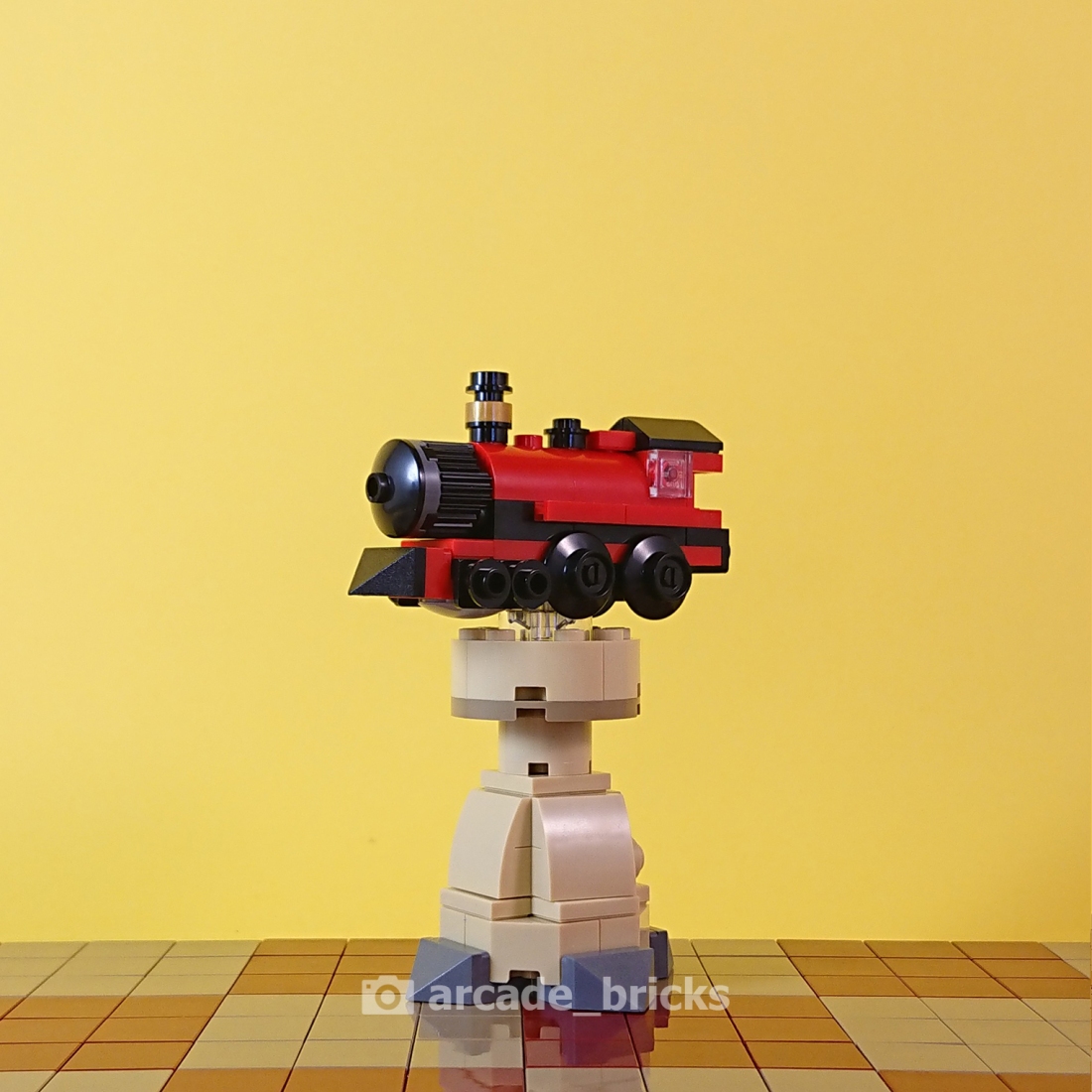 The two knights, Sirius Black and Professor Flitwick both ride on hippogriffs (inspired by the Dimensions version of Buckbeak).

Snape and Hagrid make up the two bishops. The detail on the base is amazing.

Dumbledore and McGonagall look great as King and Queen respectively. Here the level of detail stepped up another level. 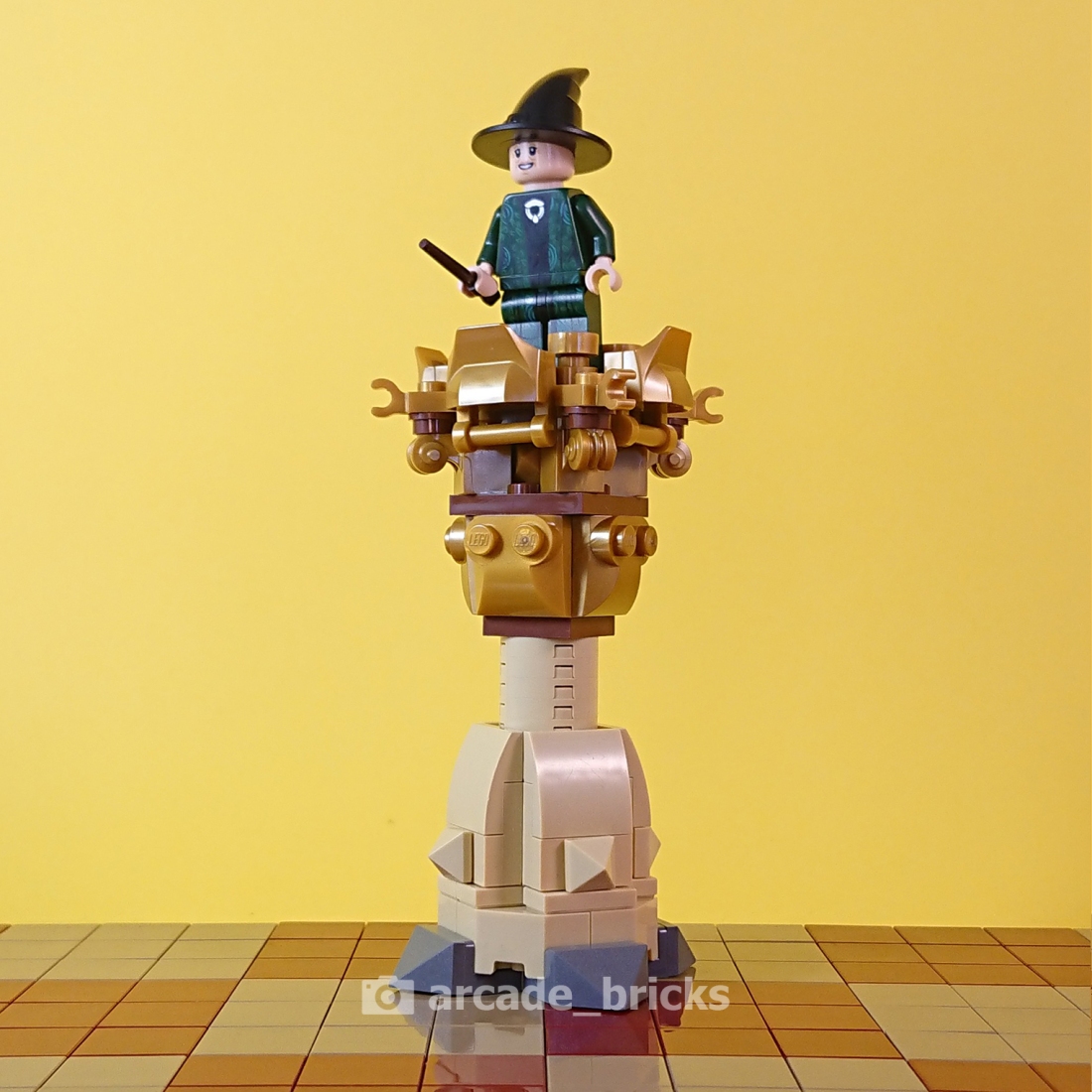 The pawns are very effectively made up of members of Dumbledore’s Army. This will be a hard side to beat!

Opposing the Order is Voldemort and his army of bad guys. 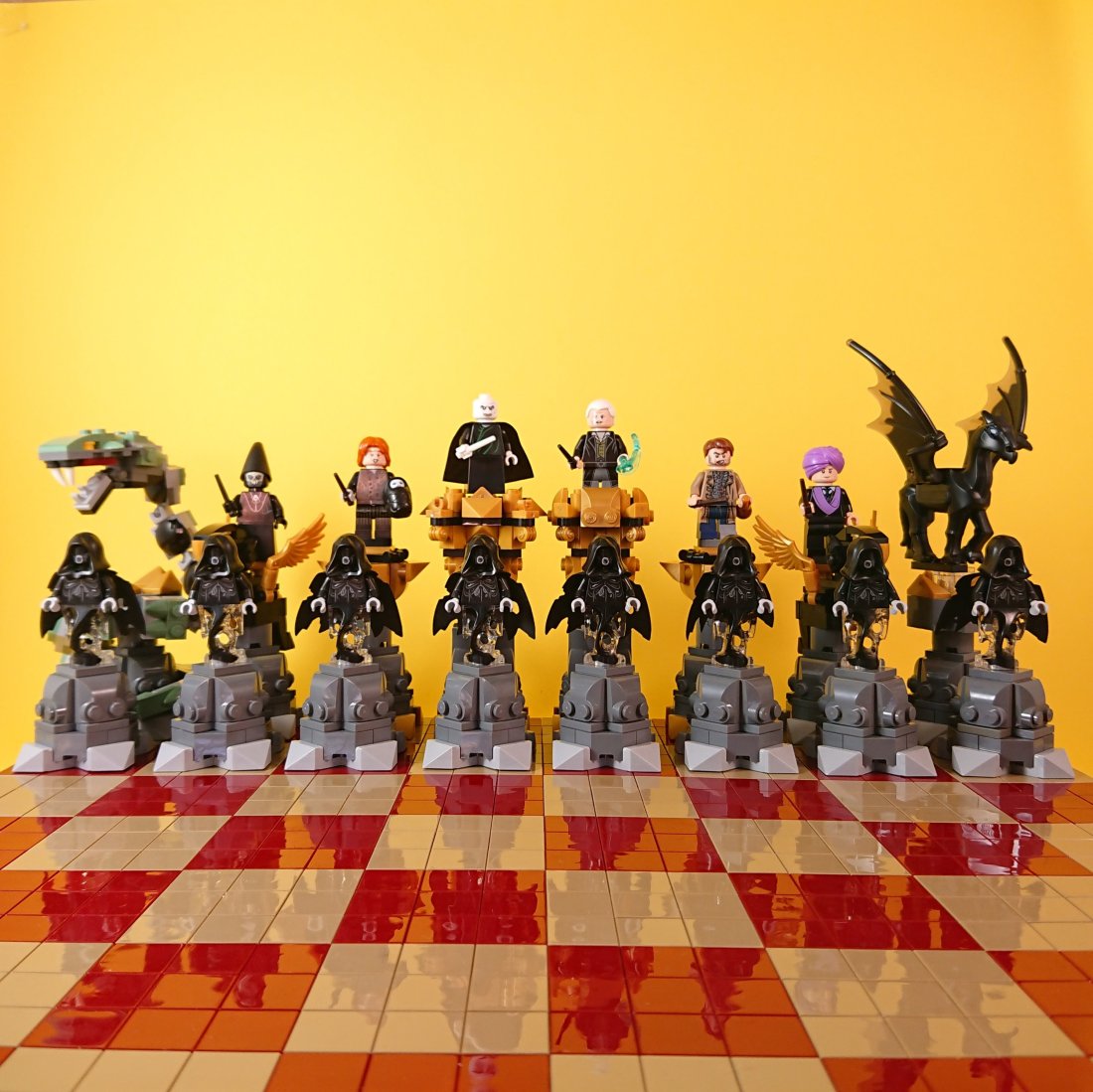 The two rooks are represented by a beautiful basilisk and a thestal (black skeleton horse looks evil, though in the books they fought against Voldemort). The basilisk in particular is very impressive!

The knights are made up of a death eater and Professor Quirrell, both riding black hippogriffs.

As his trusted bishops, we have Peter Pettigrew (with baby Voldy) and Barty Crouch (Jr).

Voldemort and Grindelwald are King and Queen, but I know that once Cade gets a Bellatrix figure, he’ll swap her in as Queen. 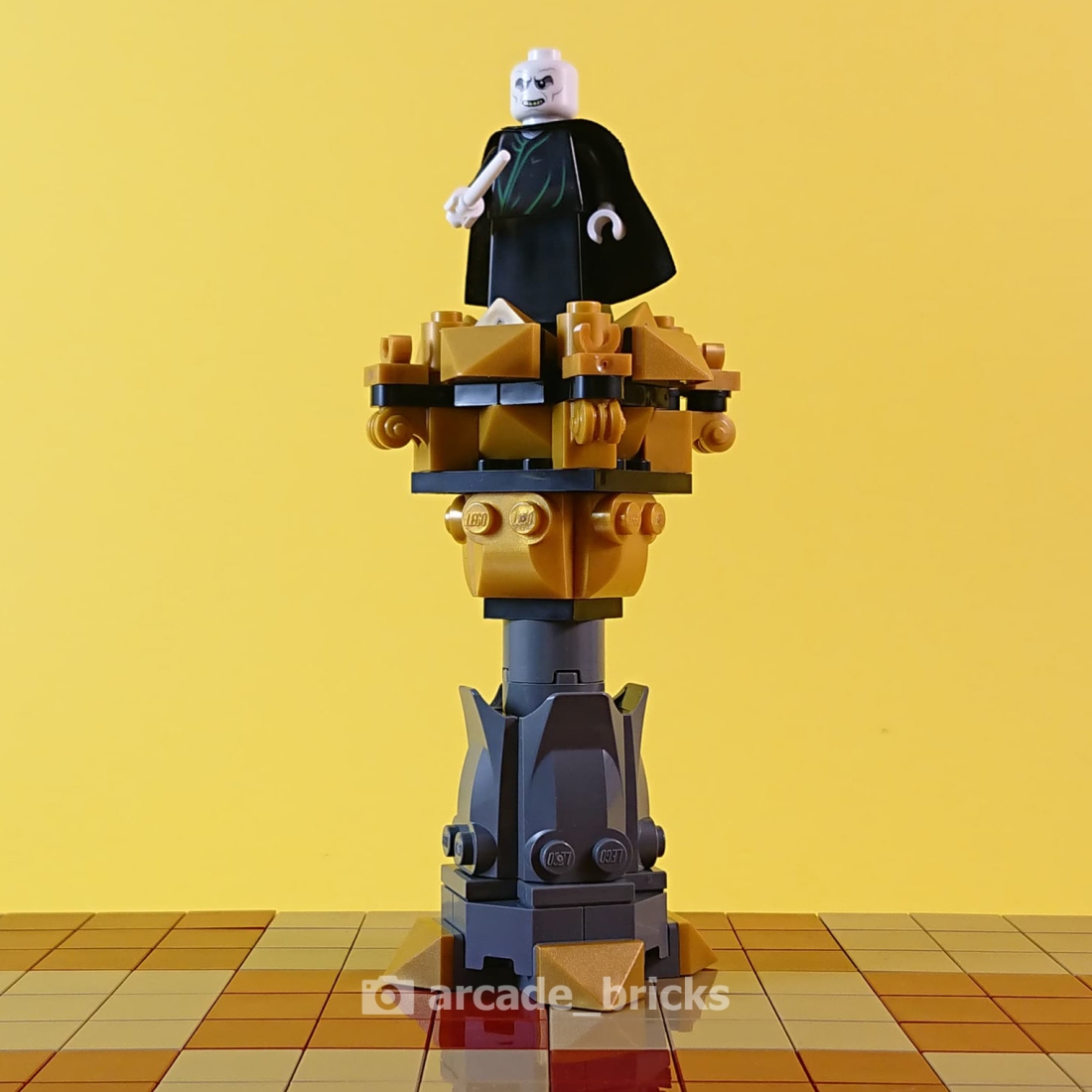 The pawns are all made up of dementors and almost my favourite part of it all. 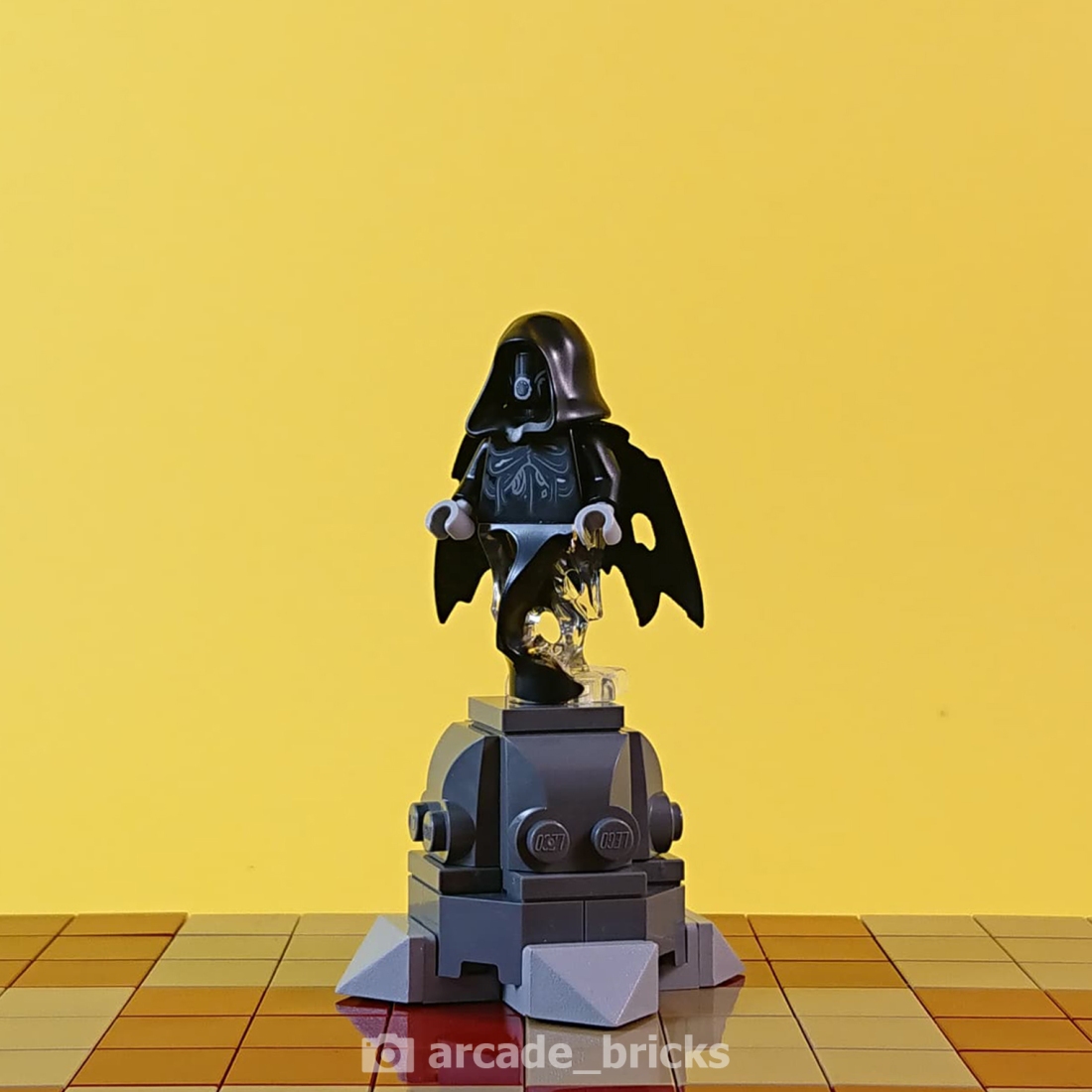 That’s all for now. I hope to bring many more Friday Features in the future highlighting the incredibly talented builders out there. Check our Features page for more.

View all posts by Hindsberger

One thought on “Team Harry or Team Voldy – which side would you play?”