January and February are exciting months for LEGO lovers. Three major toy fairs worldwide are often used by LEGO to reveal upcoming sets, and last year we indeed saw the new Harry Potter sets during those, for instance as reported in 2018 by Brothers Brick. 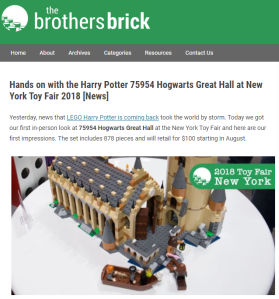 I’ve therefore with excitement been following the London Toy Fair 22 to 24 Jan as well as the Nuremberg International Toy Fair (Spielwarenmesse) 30 Jan to 3 Feb for any news on upcoming Harry Potter sets. So far no news, but tomorrow the American International Toy Fair in New York may give us the news we are all waiting for!

Rumours of new 2019 sets have been around for long. Late last year, these centred around three sets:

While widely circulated, these didn’t seem to fit with the fact that first wave of sets released 1 July 2018 focused on the first two years and the Hogwarts Great Hall set even included a brick built basilisk, which otherwise should have been a centerpiece of a Chamber of Secrets set. The Room of Requirements plays no role till the Order of the Phoenix (as per my write-up here), and you would rather have expected the new sets to cover books 3 (Prisoner of Azkaban) and 4 (Goblet of Fire). Finally, a Diagon Alley set in the style we saw it in 2011 would most likely be a direct-to-consumer (DTC) set with a separate reveal like the huge microscale Hogwarts Castle set last year.

With that in mind, I sat my expectations for something else. Ahead of the Toy Fair tomorrow, The Brick Fan and BrickFanatics have published a new – and much more plausible – set of rumours indicating a total of five upcoming sets:

I would speculate this would either be Harry’s lessons with Professor Lupin, or alternatively his first really successful use of the spell fending off dementors chasing Sirius Black and himself by the lake shore.

There are so many possibilities here. It could be a remake of one of the 2005 sets: the Hungarian Horntail (first test), the Rescue from the Merpeople (second test) and the Graveyard duel (following the third test). But hopefully, it will rather be something new, like a moving labyrinth (third test), or Moaning Myrtle giving advice on how to listen to the Golden Egg in the prefects bathroom.

A new Hagrids hut will be the forth such set, but iconic enough to be included for a new line of sets. Not sure the hut itself will be much improved over the last two versions, but if combined with a decent pumpkin patch and Buckbeak, this could be a winner.

Like Hagrids hut, this would be a remake of two previously released versions. Both are quite decent, so it would be interesting to see if this brings anything new.

The fifth set can be pretty much anything, but hopefully will connect up with the Hogwarts Great Hall and Whomping Willow sets. Potentially, it could be a remake of the Sirius Black’s escape set (another option to re-introduce Buckbeak).

Finally, I hope we will see a Harry Potter themed DTC set revealed later in the year.

I have my finger’s crossed for tomorrow.