The weekend 18-19 January 2020 I visited Brickvention in Melbourne. It was an amazing experience with 300 exhibits and expectedly 22,000 visitors. This makes it Australia’s premier LEGO Fan convention. This post covers the exhibits I saw that were Harry Potter related and really shows the skills of the builders exhibiting there.

In the center of the venue (which is the beautiful heritage listed Royal Exhibition Hall) was a large Harry Potter display by Alison Boomsma and Duke Bradley. 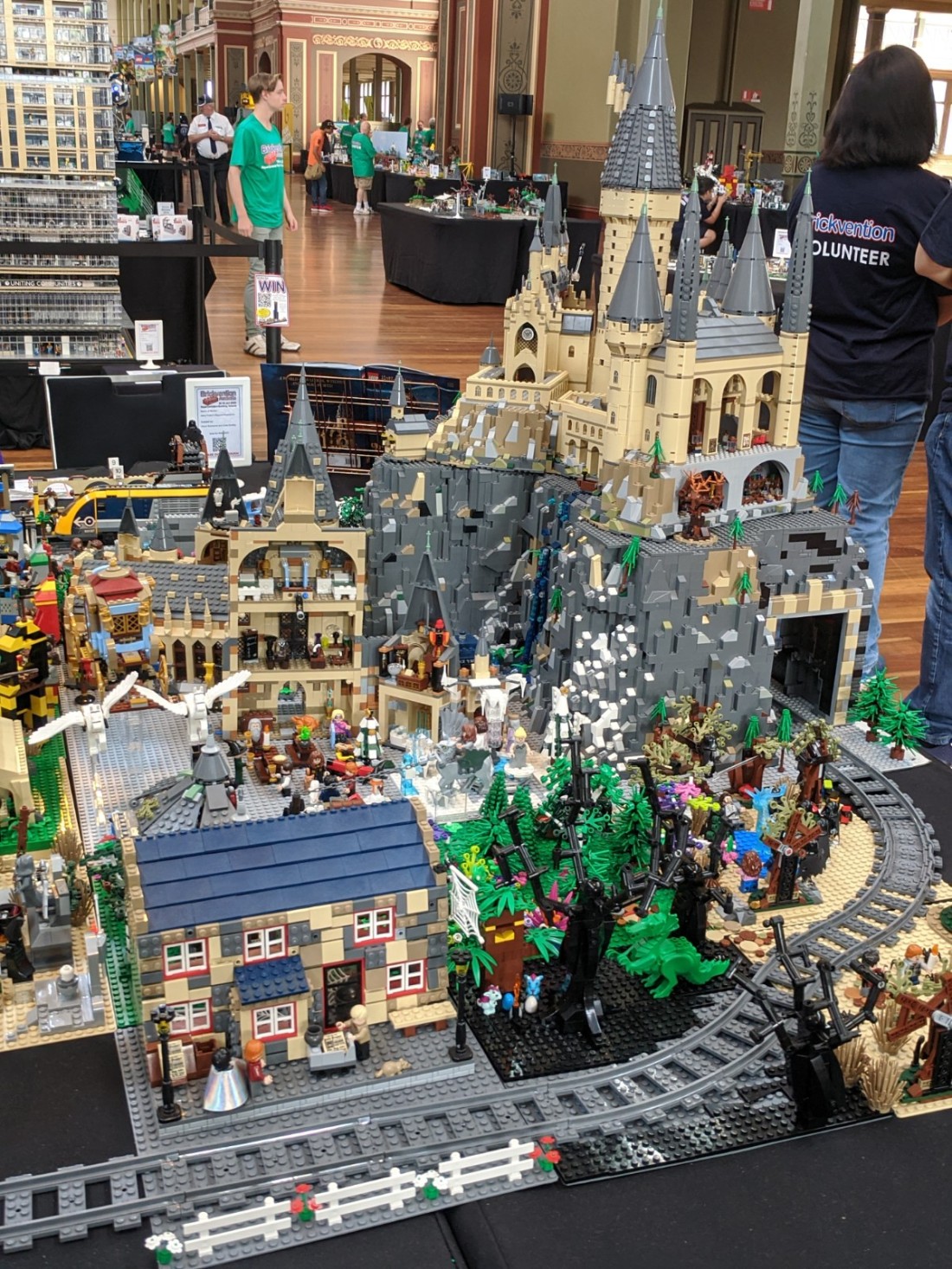 The center-piece based on the micro-scale Hogwarts castle (set 71043). The Hogwarts castle is on top of a built up cliff and when looked from low above the table, for example with the Quidditch pitch in front, it created a nice “forced perspective” effect. 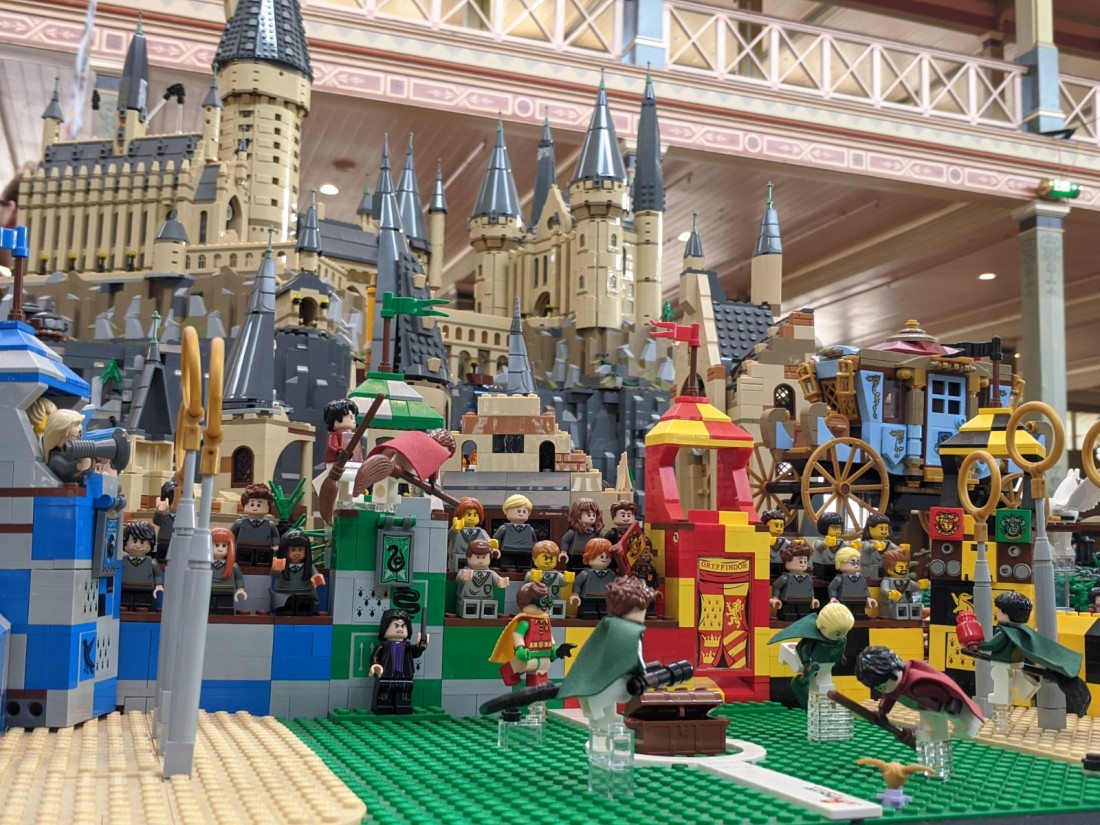 Apart from the Quidditch pitch, it had a number of other vignettes around it, including a nice looking Hogsmeade station, Little Hangleton graveyard, and number 4 Privet Drive. The photo gallery below shows some of them. 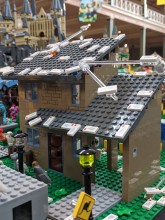 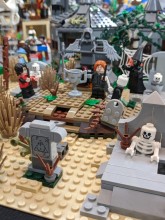 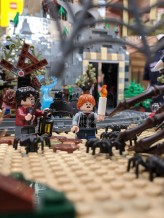 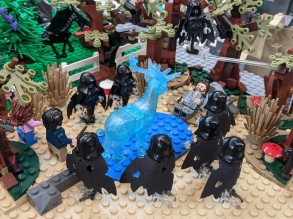 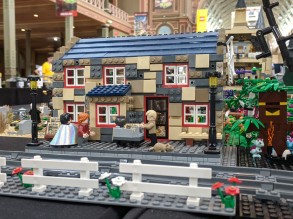 Next I came across two mini-models by Wade Davey which covered two scenes from the Hogwarts grounds. The first one showed Hagrid’s Hut and is based on the 2019 set, thought the hut is built out to not have an open back (something I’ve wanted to do myself) and added an impressive landscape. 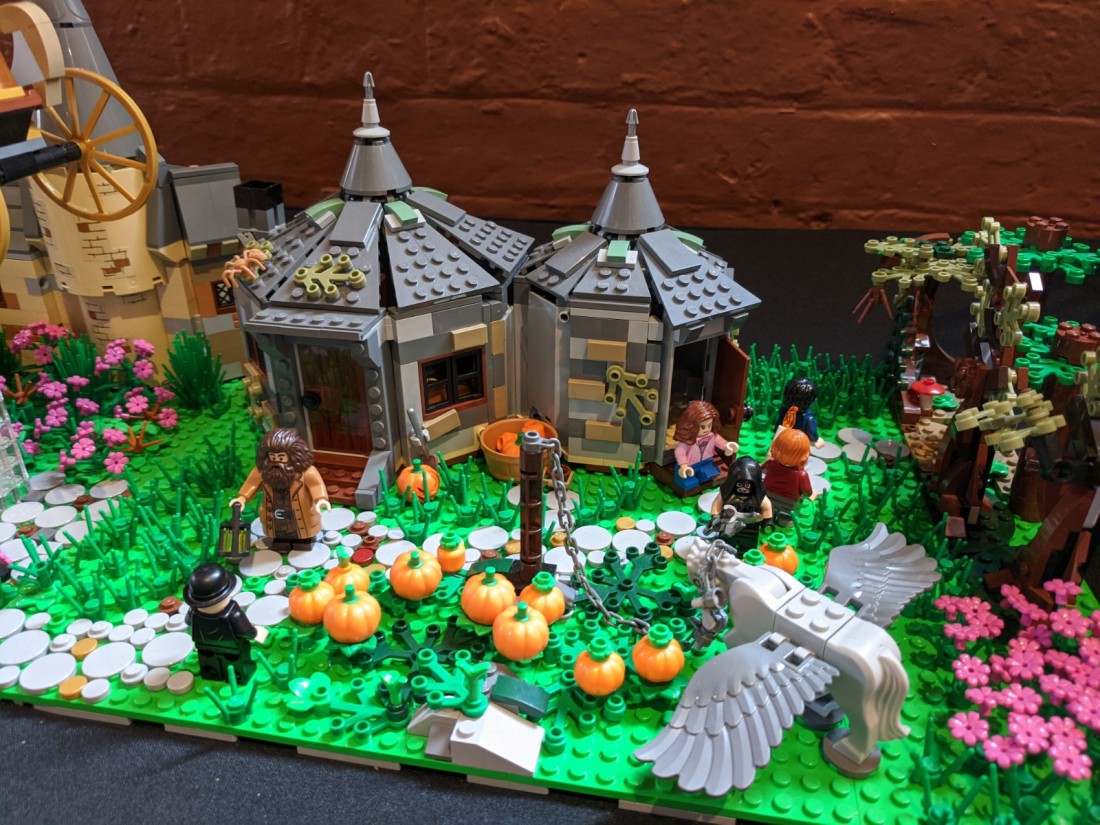 The other shows the arrival of the Beauxbatons delegation for the Tri-wizard tournament with their magical carriage coming in to land in front of Hogwarts. It was based around the Beauxbaton’s carriage set with the Clocktower set used effectively as a backdrop. 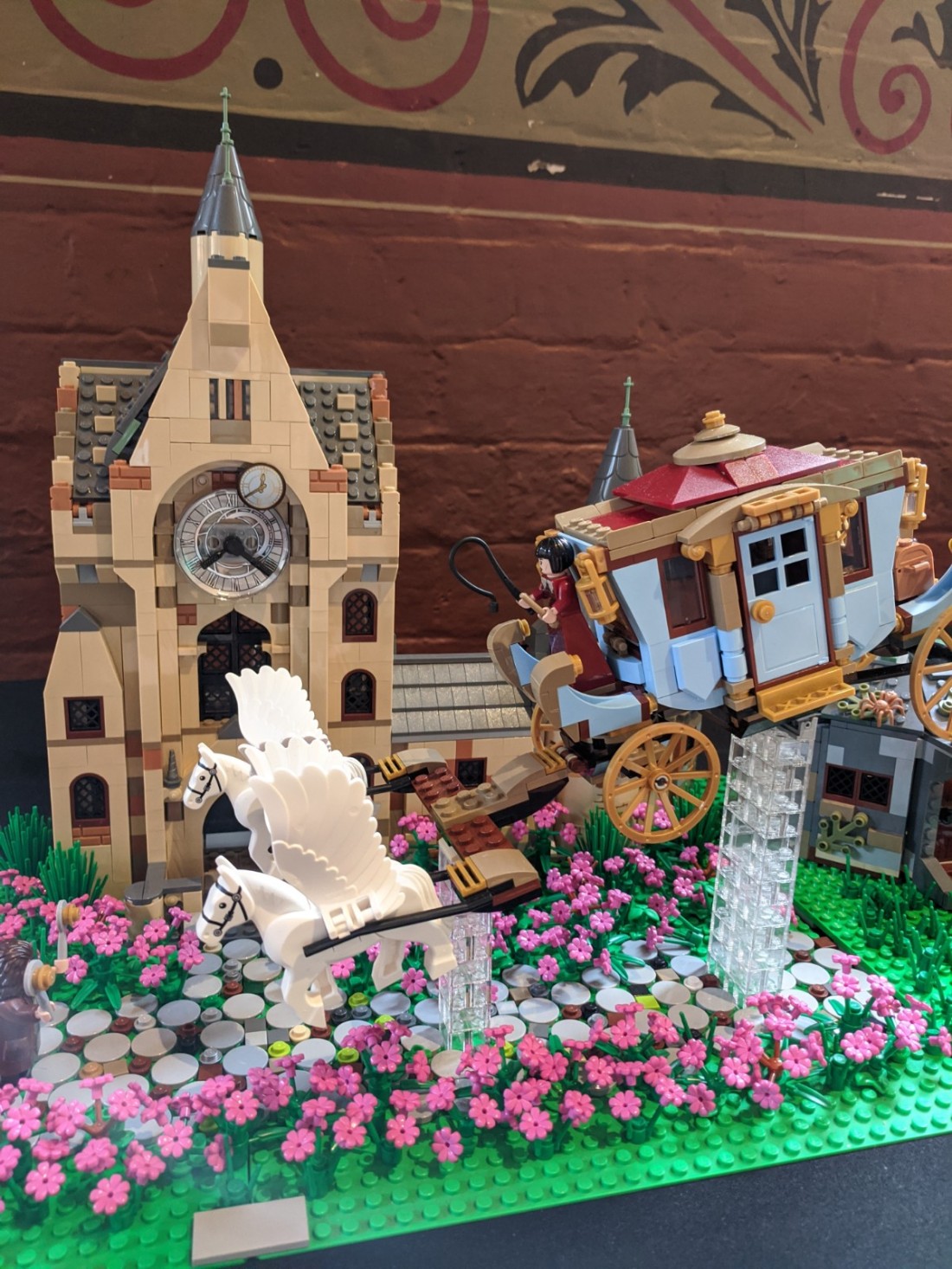 These two models show how you can add to existing sets to make them excellent display pieces.

In the other side of the Royal Exhibition Hall, I came across a series of small models created by Jijin Koid, depicting scenes from various movies, such as Narnia and My Neighbor Totoro. One of them however very effectively displayed Ron and Harry entering Platform 9 3/4 on King’s Cross station. 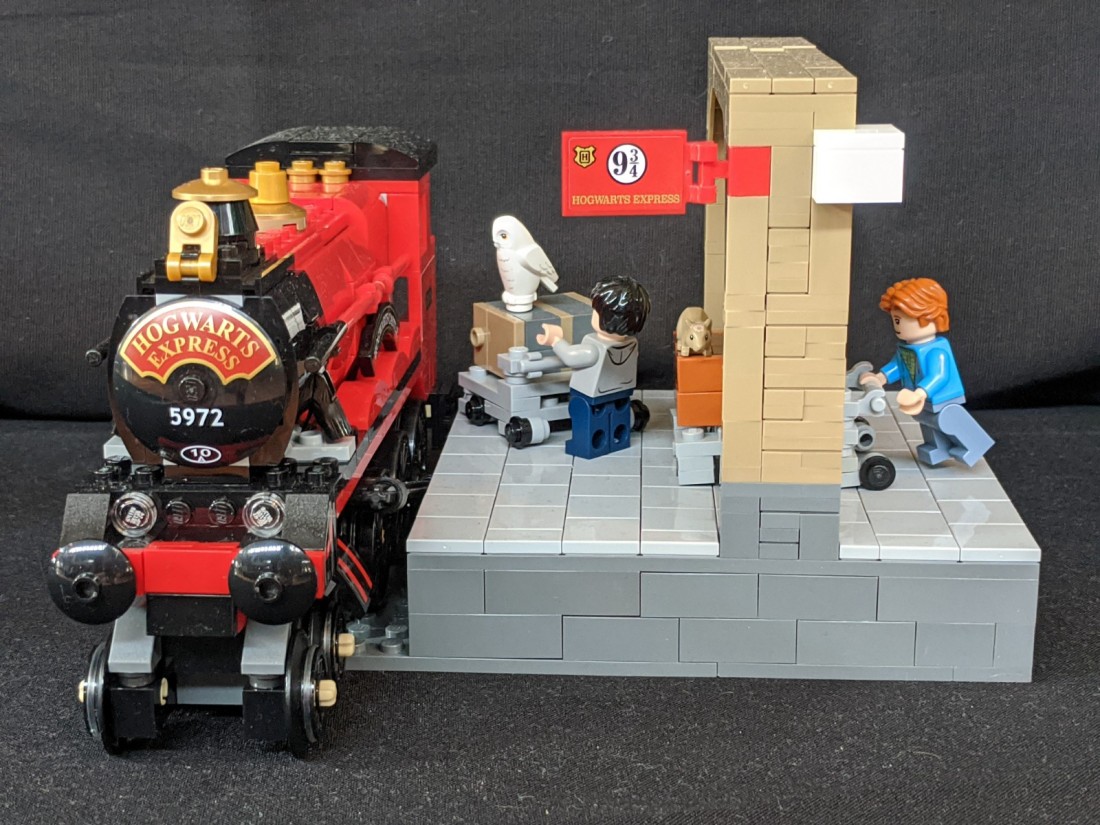 It is impressive how much story-telling and detail a 16 x 16 model can show.

Two Harry Potter themed mosaics were on display and interestingly enough quite different in style. Firstly, we had a portrait of Professor Severus Snape by Kara Harris. This is made using colours (with a Slytherin green background also showing the deadly hallows symbol) and tiles instead of bricks/plates. 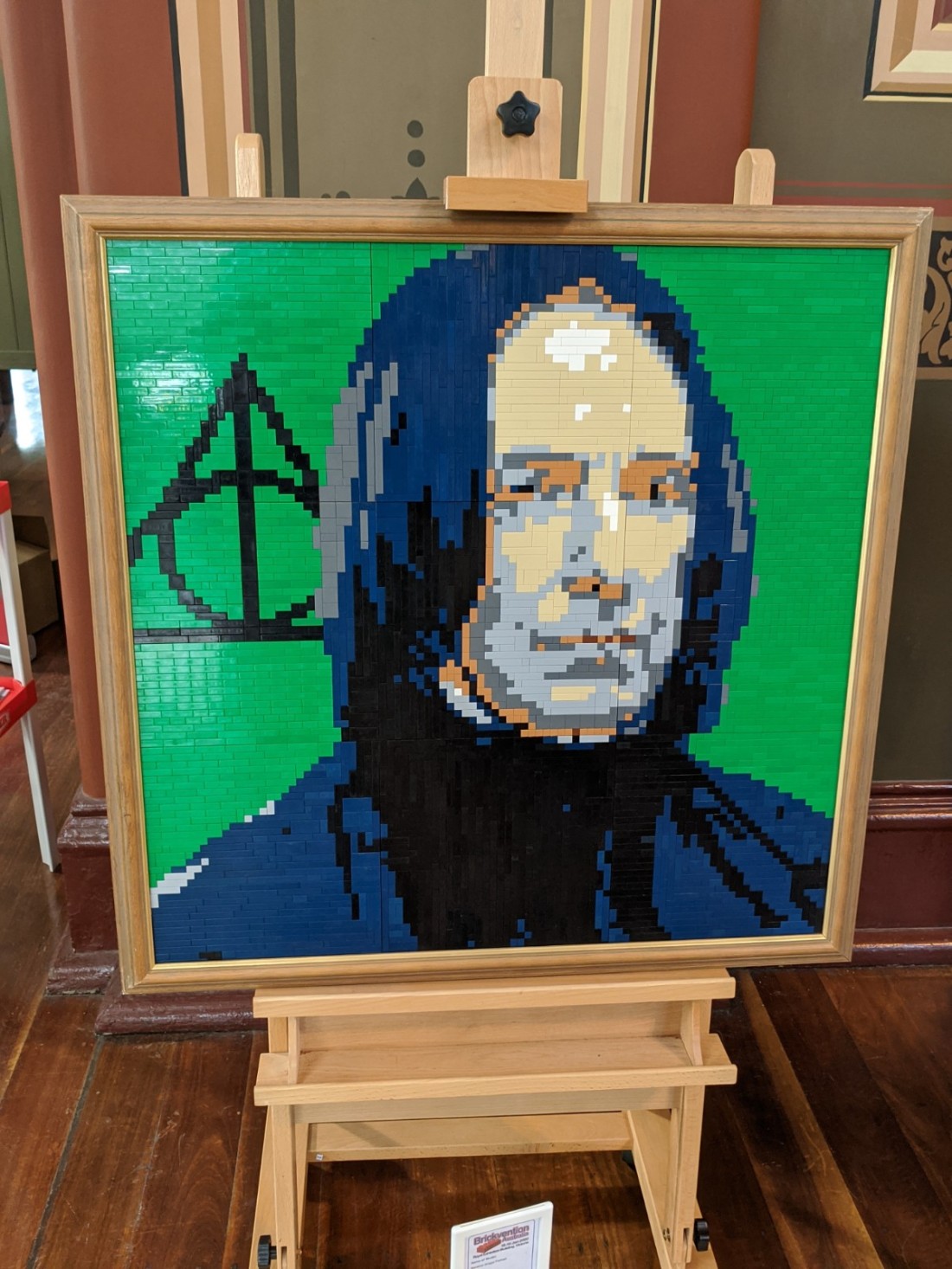 The other mosaic was portrait of Hermione Granger by Robert Kingston. This mosaic uses plates and grey-scale colours. 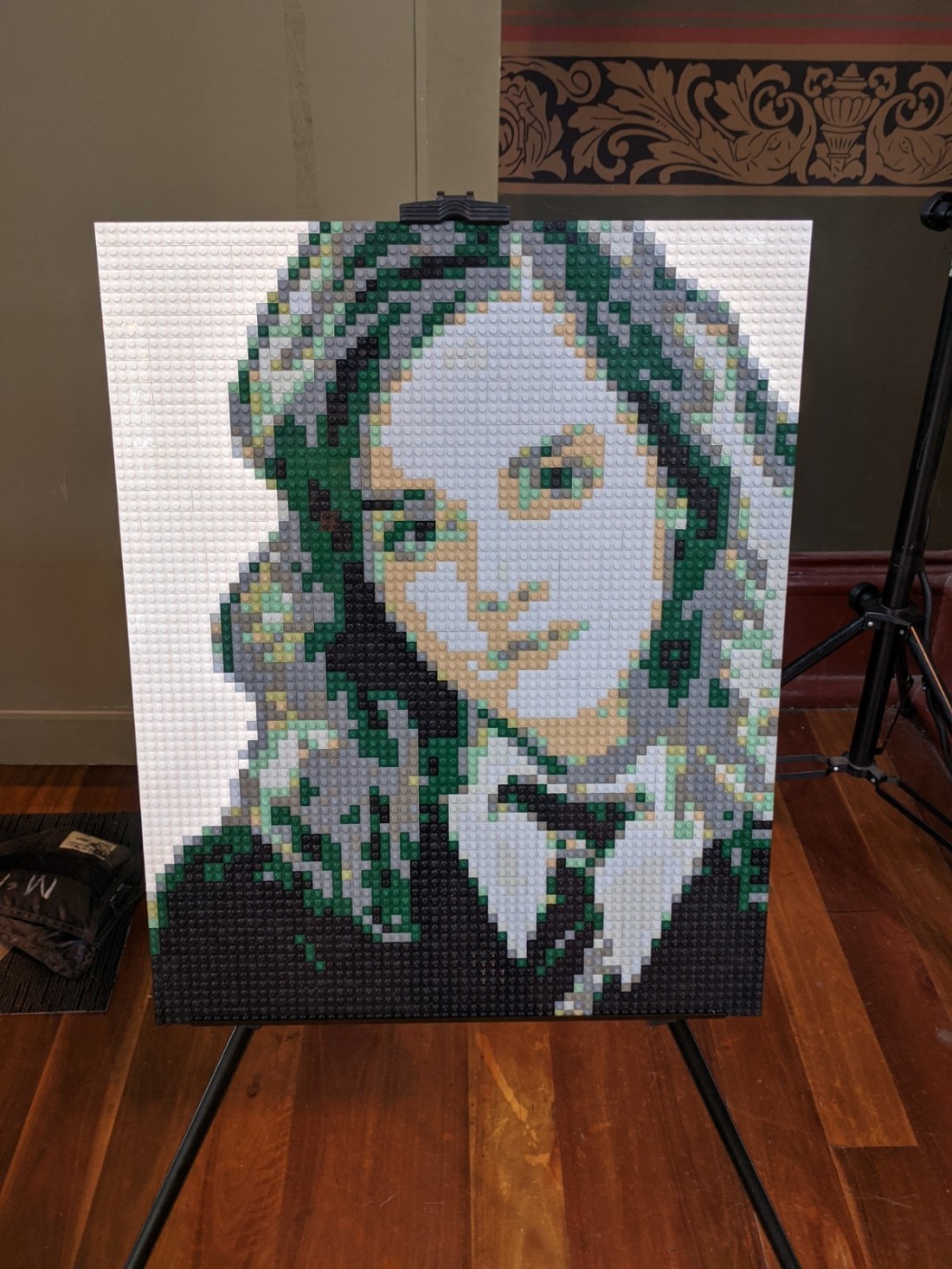 The next display I came across was created by Narelle and Andrew Robinson and was simply called a-MAZE-ing. It featured (not surprisingly) a large maze, but the interesting thing was that different parts of the maze had different themes, such as Pirates, Space and one section being Harry Potter. Overall, it was a really interesting display to watch, trying to work your way through the different paths. 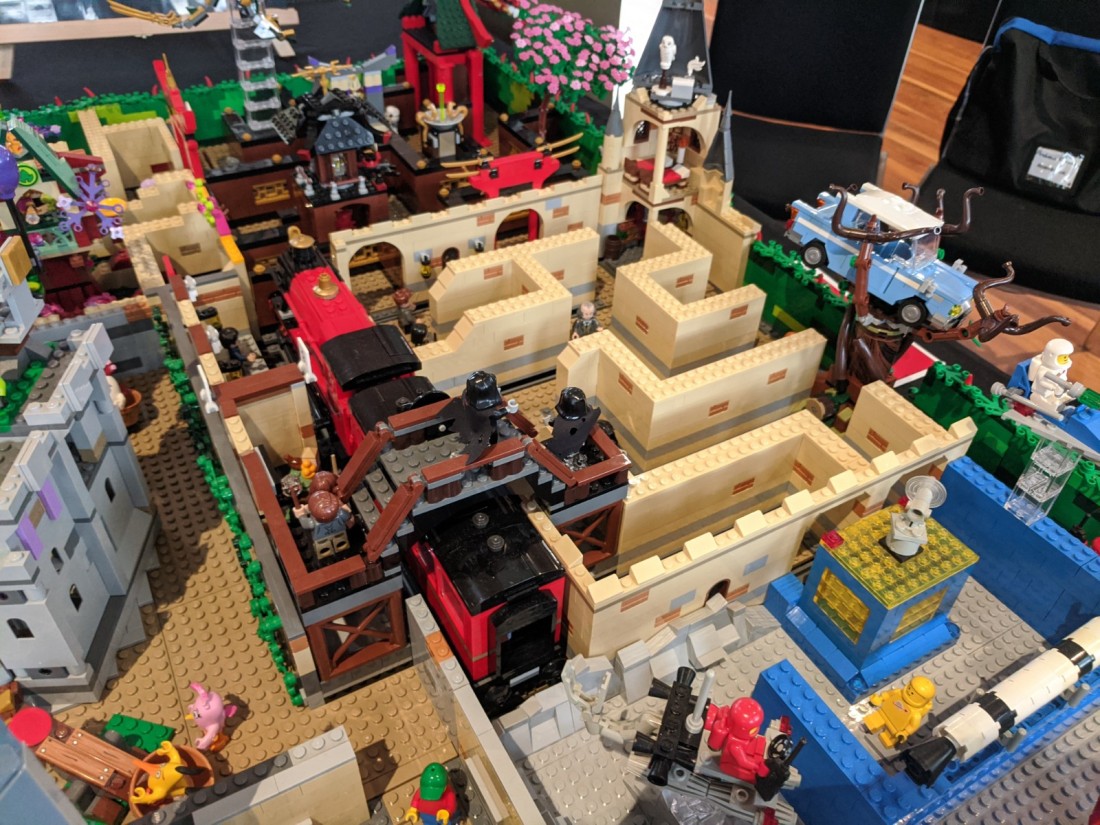 The Cursed Child at Princess Theater

I might have saved the best for last. The Princess Theater in Melbourne currently plays Harry Potter and the Cursed Child (in Australia the play is exclusive to Melbourne). And sitting in the major train layout by the Melbourne L-Gauge Train Club among other Melbourne landmarks, I saw this magnificent recreation of the theater, complete with “Now Playing” Cursed Child signage. 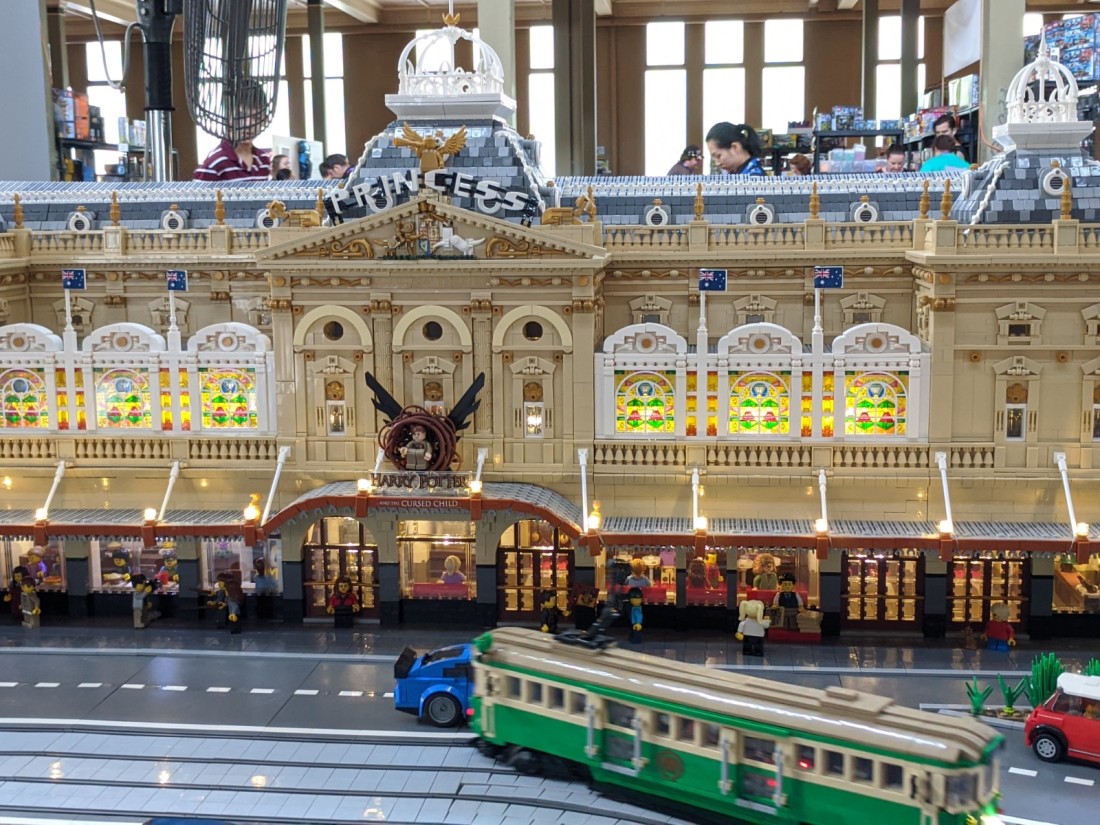 This particular building was created by Alex McCooke. Look at the details! 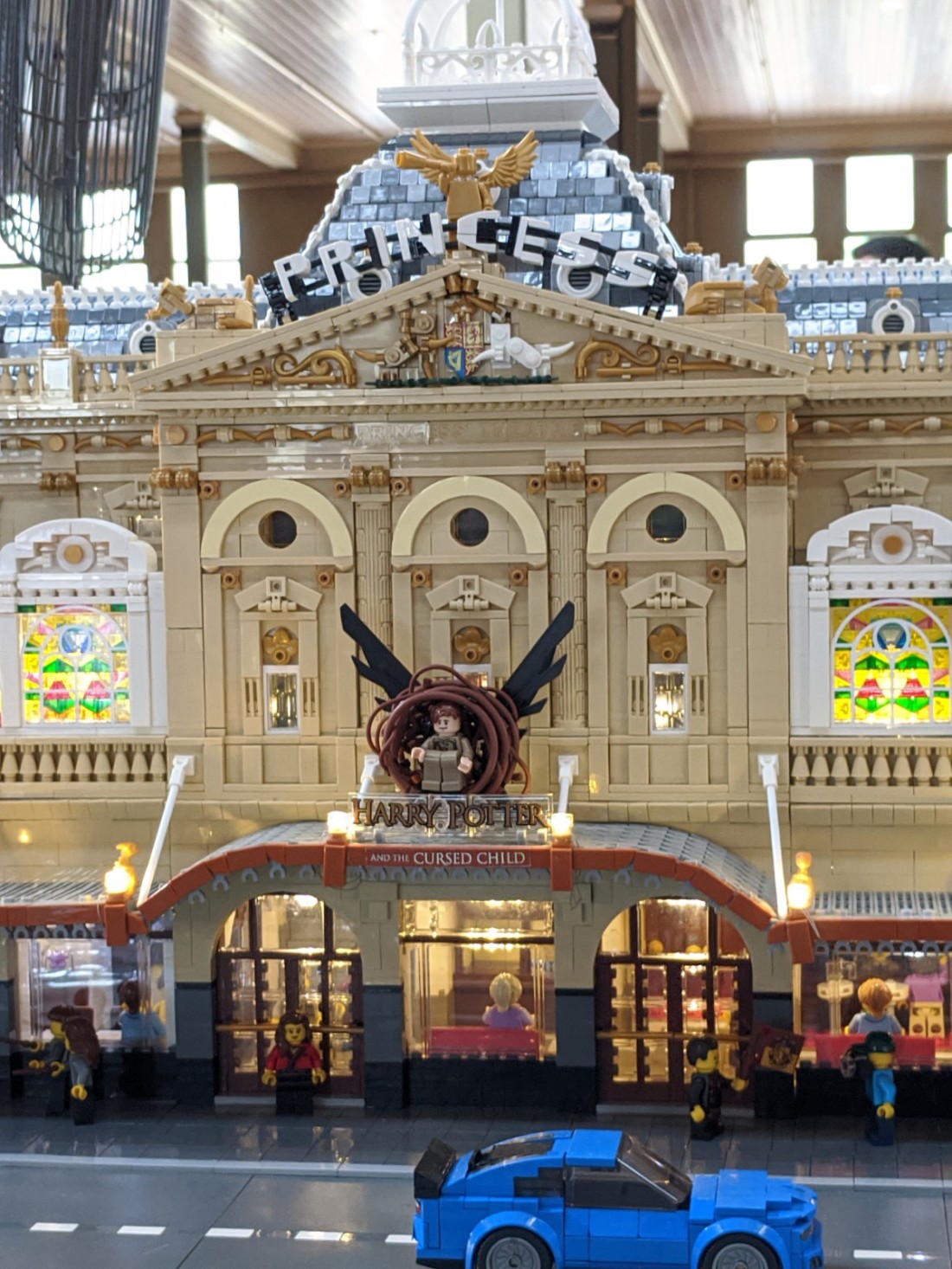 For comparison, I walked past the actual theater and you can see how accurate the details are looking at the photo below. 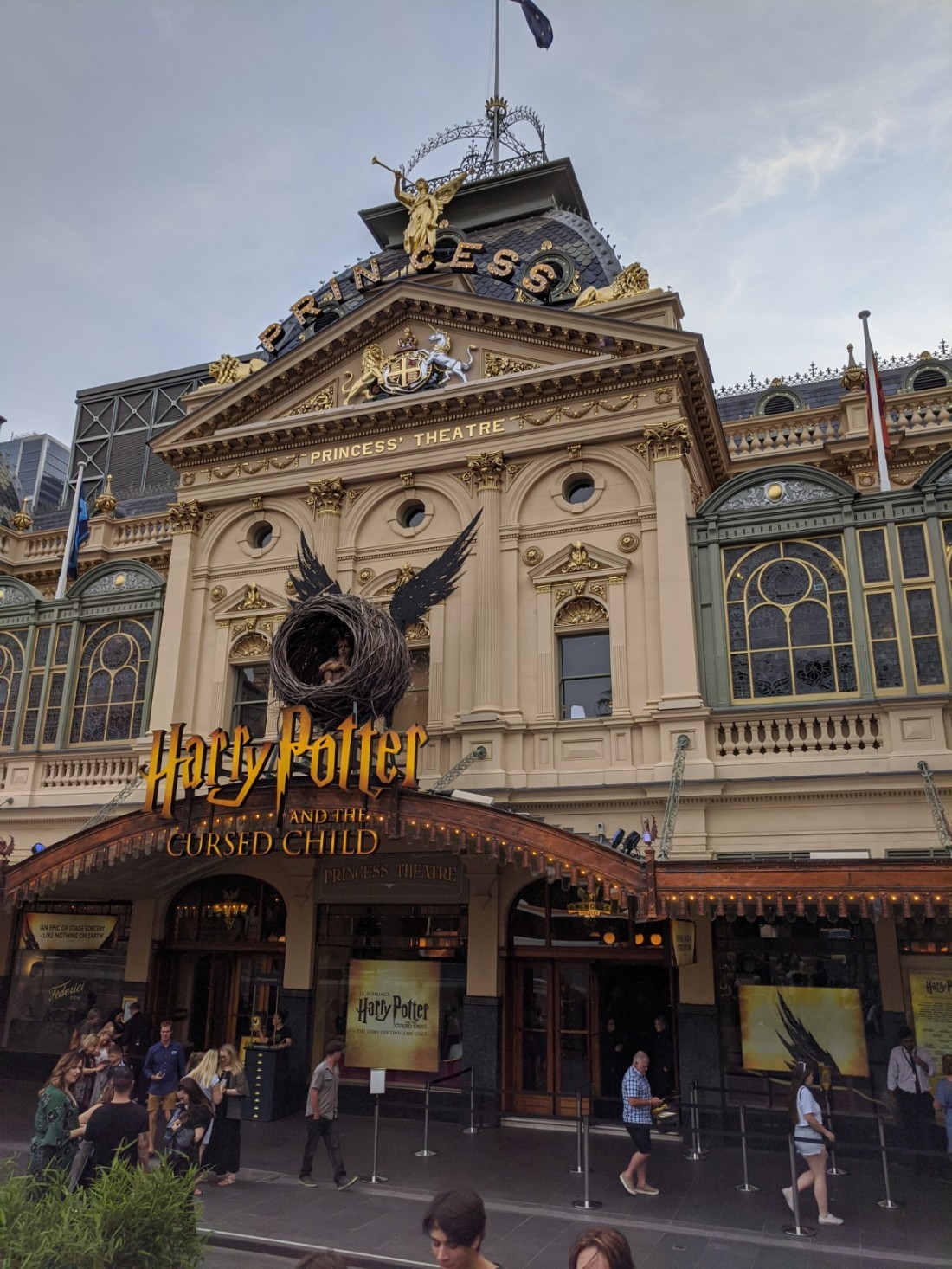 Build in 1886, the theater is one of Melbourne oldest and most famous theaters.

As the number of displays was huge, I may have missed something Harry Potter related and apologise in advance for that.

In summary, I was really impressed by so many of the models on display and it can fully be recommended to visit, should you be around Melbourne in mid January one year.

I hope you liked this event feature. Check our new Features page for more such event reviews in the future.

One thought on “Brickvention 2020 – review of Harry Potter displays”