When the Clock tower set came out mid year, I planned to skip it, but quite wanted the figures. The whole set grew on me, realising you got a number of new rooms: Prefects bathroom, Madeye Moody’s classroom, and the hospital. So when it eventually went on sale, I bought it immediately. Reviewing it has taken months though. But as the set has all the minifigures dressed up for the Yule ball, I thought I better get it done in time for Christmas.

Looking at the box, it has the same colour scheme as the rest of the 2019 sets. What is slightly unique is the shape though. The front is pretty much square. The only reason I can think of is to better show the finished model on the front. With the falling snow, and Yule ball decorations shown at the base of the tower, it makes it look christmassy. 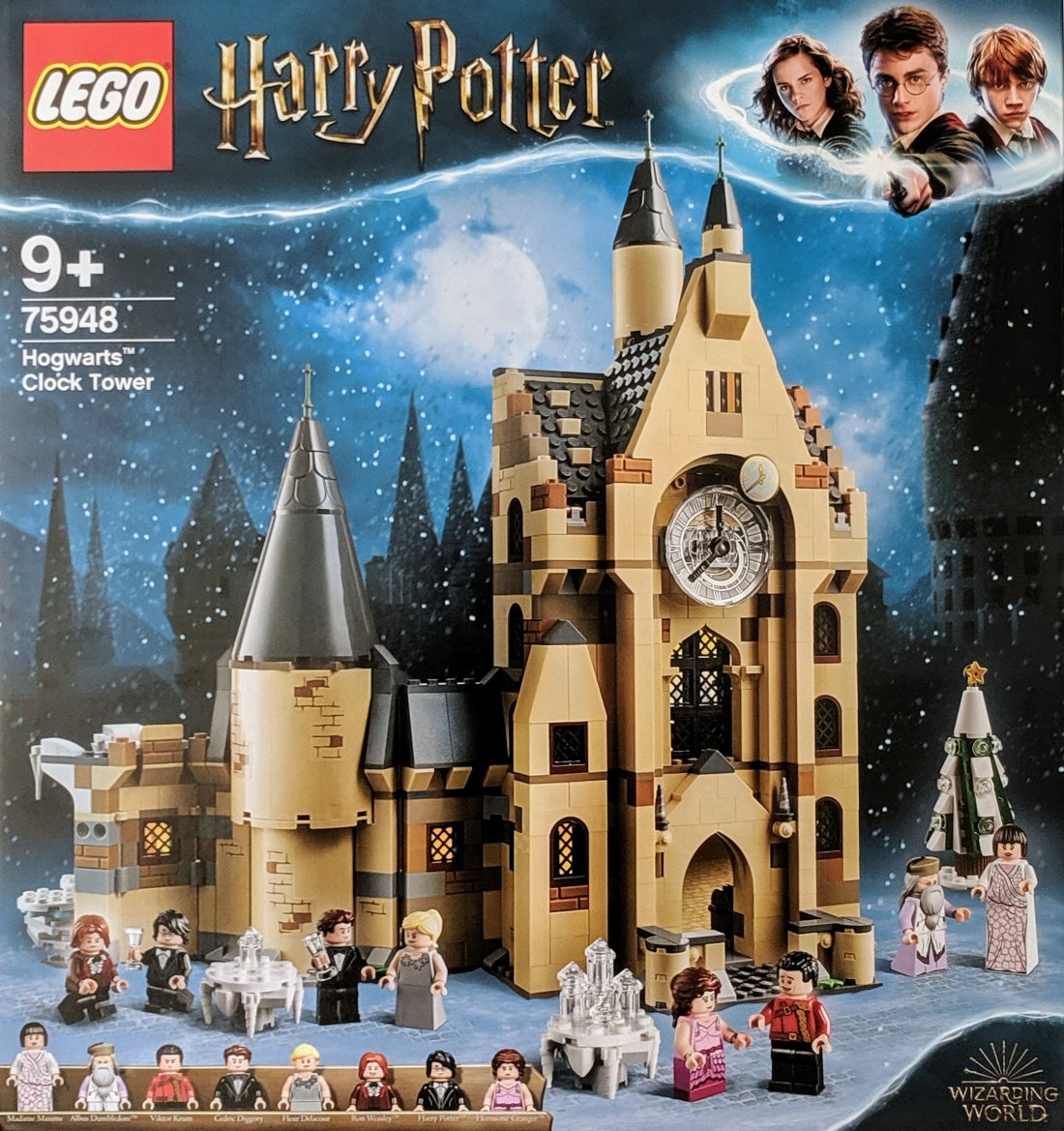 The back, as usual, shows the details of individual rooms and close-up photos of the various play features.

Inside the box you will find six numbered bags with parts and a couple of loose octagon plates.

The stickers are packed with the manual in plastic, as what has becoming normal for larger sets, reducing the risk of them being squeezed. In particular the transparent sticker with the mermaid caught my eye (and will be discussed later).

The first section we get to build is for the dancing scene at the Yule ball from the Goblet of Fire. The main feature is a rotating floor, which when turned rotate four small plates which each again fit a dancing couple. There is a warming fire by the wall, but otherwise, the theme is snowcovered, with several icicles. 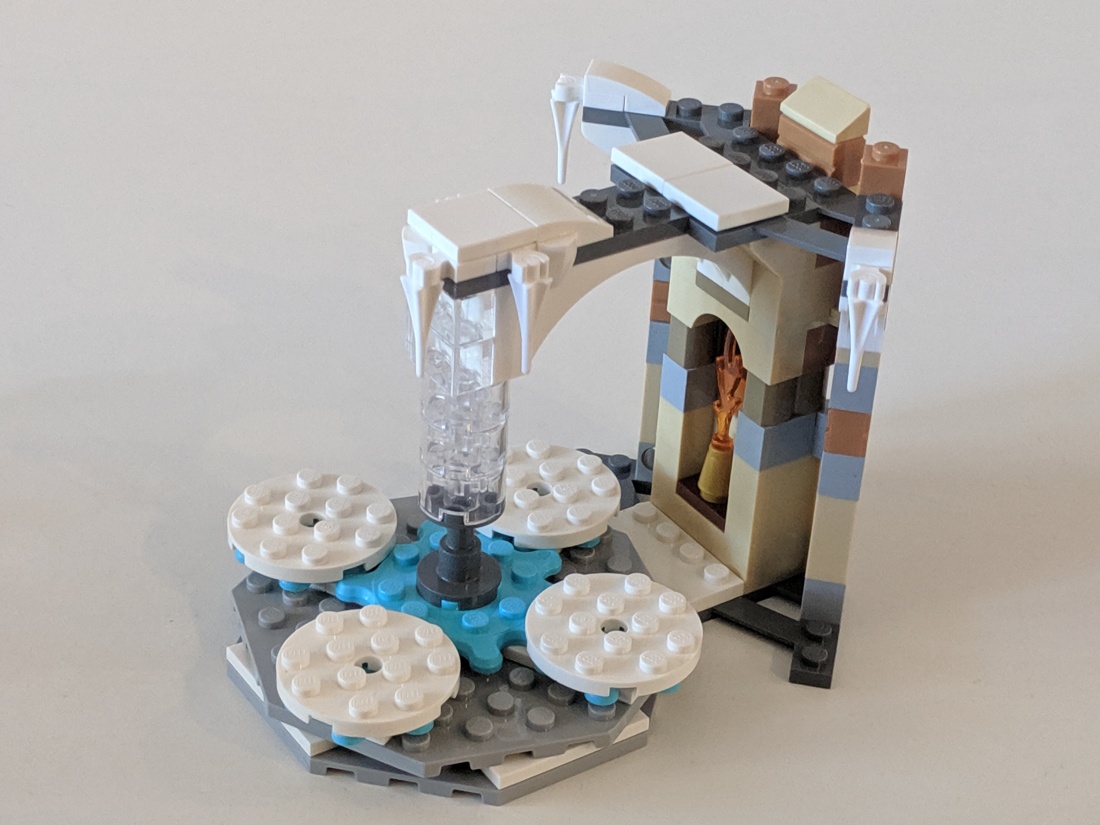 There are some smaller models that represent the tables with ice decoration as in the Goblet of Fire. 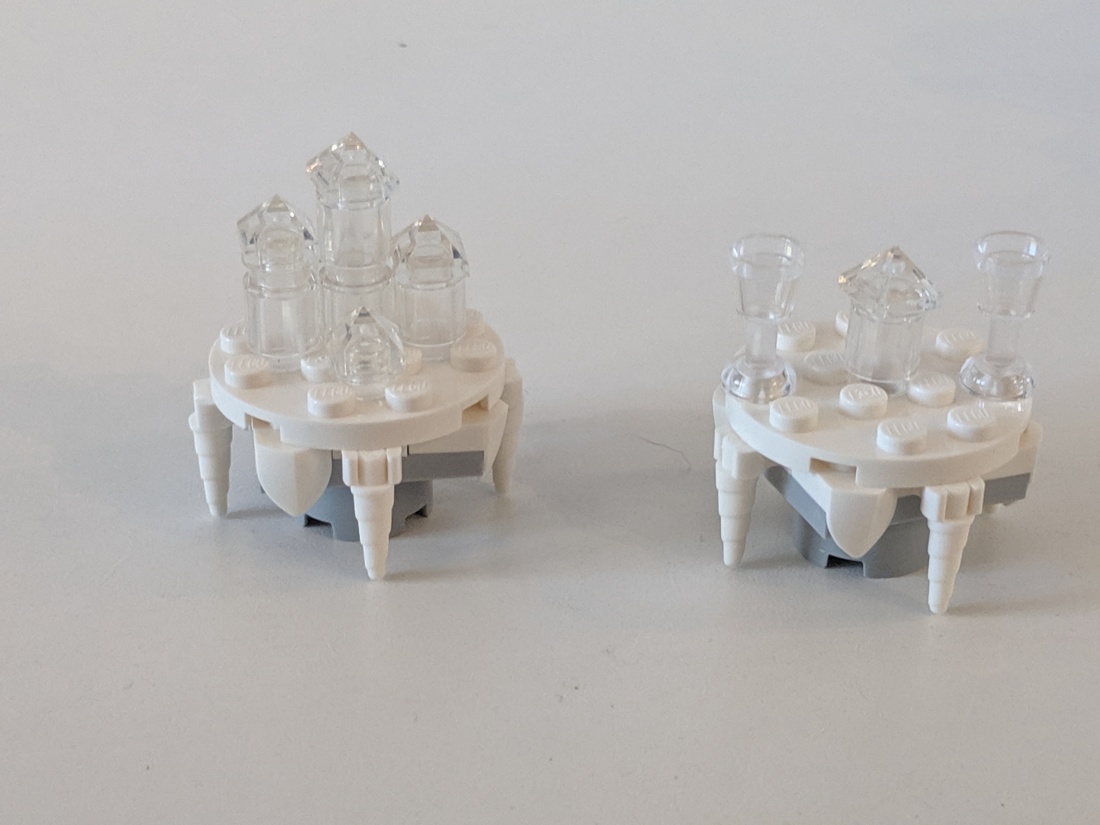 Next we get to build Dumbledore’s Tower. The ground level taken up by the Prefects Bathroom, which I was particular pleased to see included (though it is really a missed opportunity to include Moaning Myrtle as minifigure). The sticker of the mermaid is used here and forms part of the story (see my blog post about the merpeople for more)

Adding Harry’s head to a flesh torso (I happened to have from another set) and the golden egg from the Hungarian Horntail Tri-wizard challenge set, I you can do a decent representation of the actual scene. But it is a shame the set doesn’t come with Moaning Myrtle.

The next level houses Dumbledore’s office. We’ve seen that in several older sets, most recently the 2010 version of the Hogwarts Castle (set 4842), but also the 2002 set simply named Dumbledore’s office  (set 4729). This one uses stickers to show the books covering the walls and the phoenix Fawkes sitting in the background. Otherwise the key feature is the desk with the pensieve next to it and above it all, the sword of Gryffindor is held in place with a clip.

Unfortunately, because Dumbledore is made with one of the dress pieces, he can’t sit down in his chair, but the desk is covering him well enough not to distract from that fact. And at least we got the minifigure that is suitable for the room. 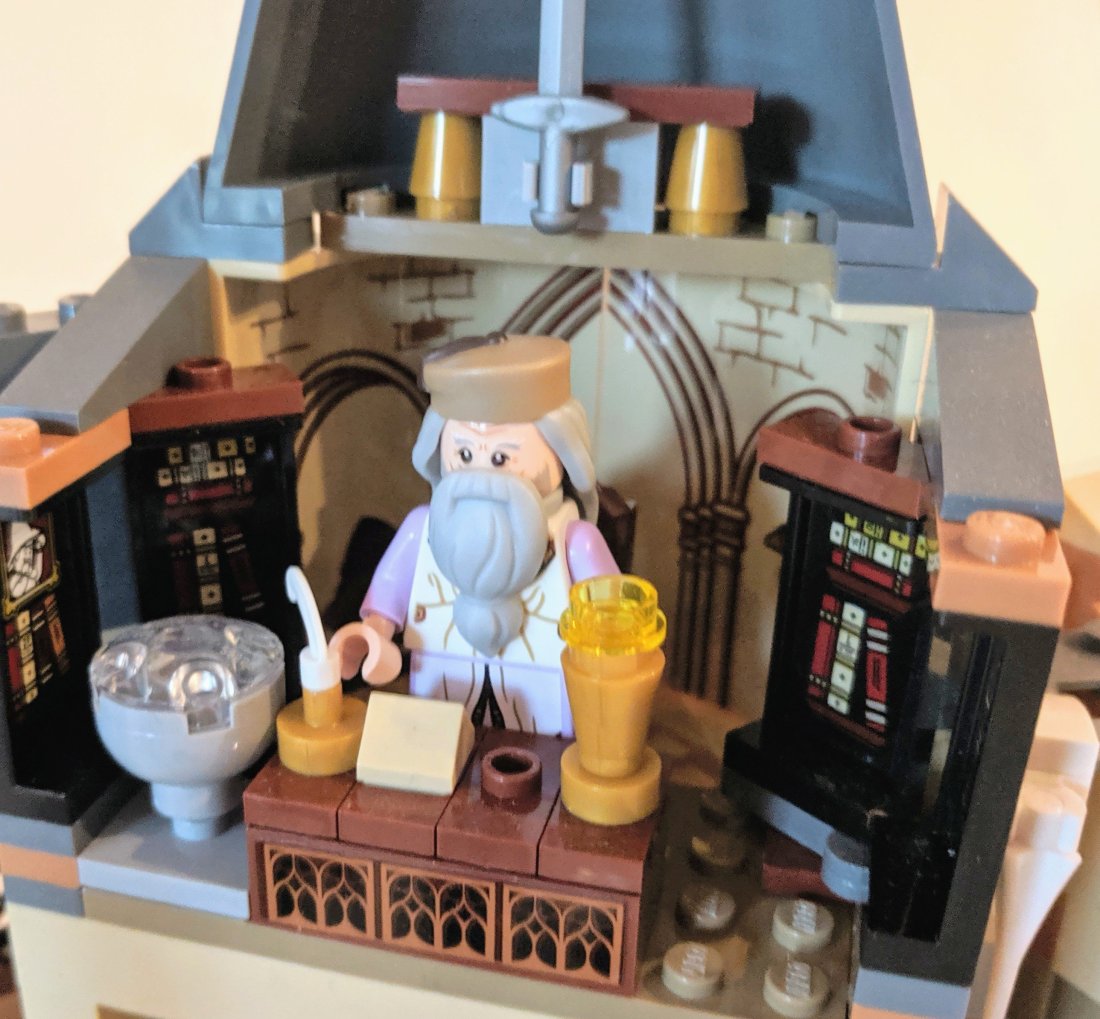 The tower connects with the Yule ball section from before. The outside matches the style of the previous sets (Hogwarts Great Hall and Hogwarts Whomping Willow) and connects with both of them.

The third and by far the largest structure we get to build is the Clock tower itself.

The base shows the entrance hall with the Goblet of Fire with the blue fire burning – ready for courageous students to put in their name into it (if old enough – Fred and George, I’m looking at you).

Next floor is Professor Moody’s office/class room. This is another nice inclusion as it has been a while since we have had a Defense Against the Dark Arts class room set (last one was Professor Lupin’s Class room in 2004). We see his different devises to look out for danger and the blackboard is set up for a lecture in the three Unforgivable Curses. Surprisingly, Mad-eye Moody is not included, so one will have to source him from the Harry Potter Collectable Minifigure Series.

The top floor is the Hospital wing. This – together with the clock tower – played a key role in the last part of the Prisoner of Azkaban, where Harry, Ron and Hermione went back in time to save both Buckbeak and Sirius Black. It features two beds and blue curtains that can be used to give patients some privacy. A handle allows the arms on the clock on the outside facade to change. 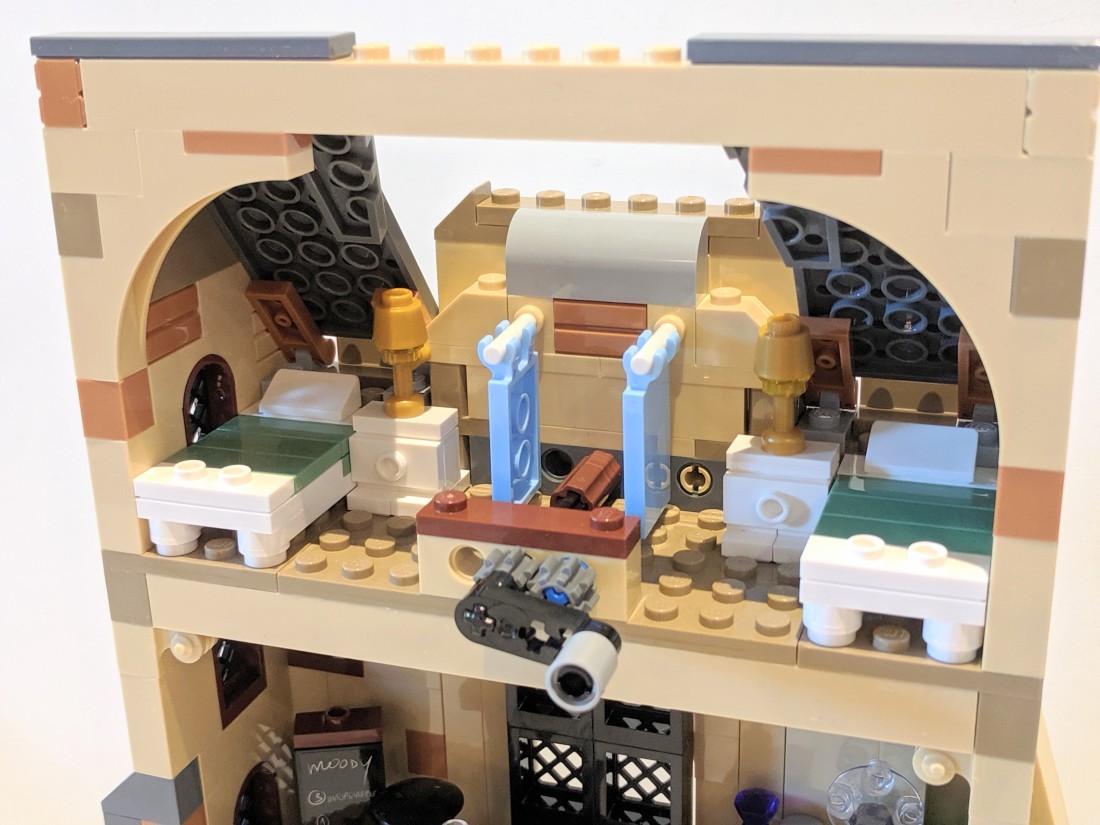 The hospital again comes with no figure for Madam Pomfrey, which would otherwise have been fantastic as she has not ever been made as minifigure.

The outside shows a big clock – similar in size to the 2004 Hogwarts castle (set 4757), but no big swinging pendulum as in that set (as reflected the movie – though the book didn’t mention the pendulum, so either can be seen as correct). The printing on the clock is highly detailed. 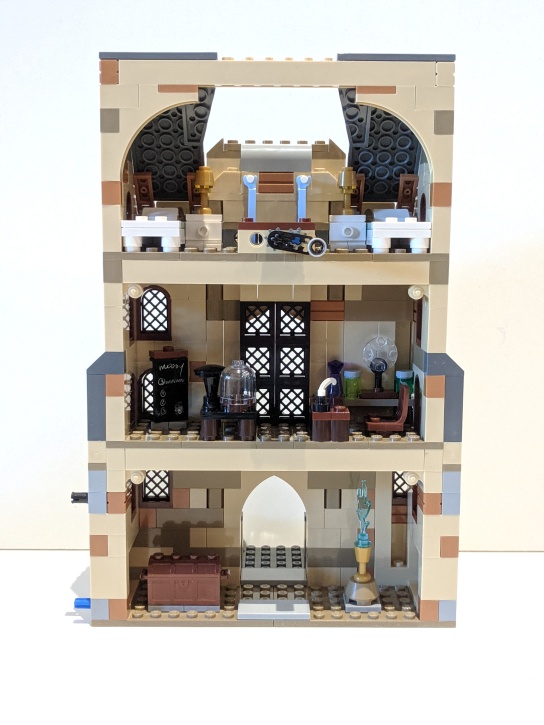 The completed set looks great when all connected up. 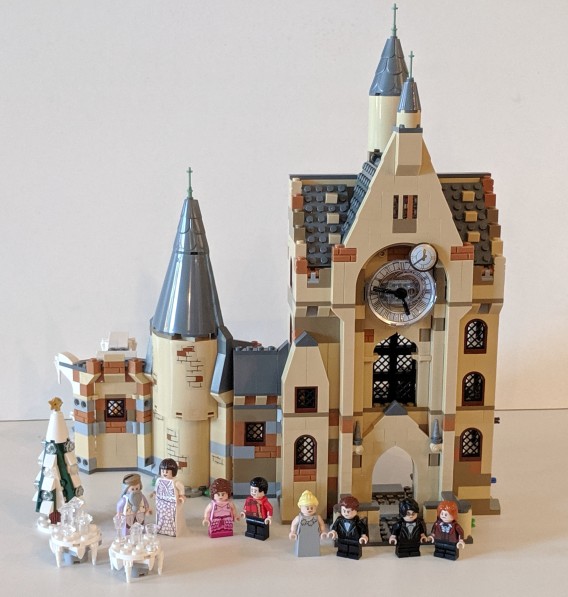 So I’ve said a lot about what minifigures that are not in the set. So I better mention the ones actually included. It is actually a very nice collection – but entirely focused on the Yule ball. We get eight characters all dressed up for the ball.

Firstly, we got Harry Potter and Ron Weasley. They come with both happy and rather depressed faces. I think the latter best represent their mood later on during the Yule ball (I’m working for a set of the Patil twins to go with them). 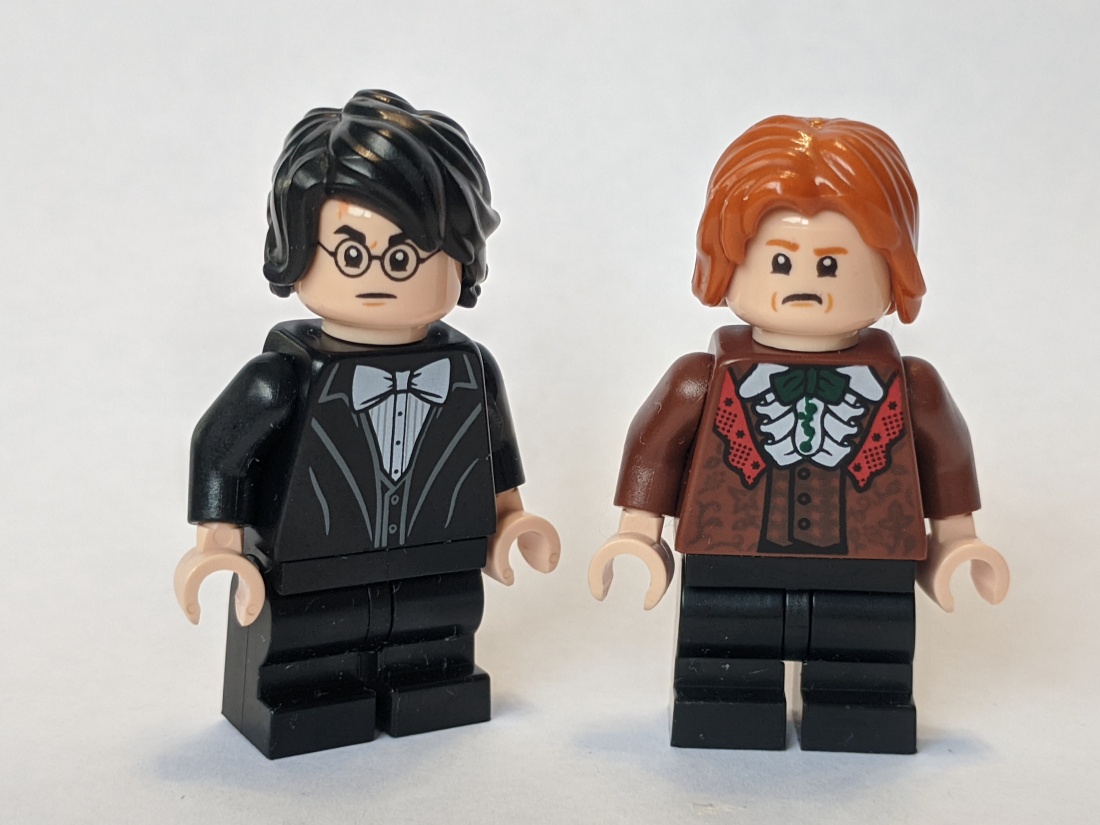 We also got Hermione Granger along with the Durmstrang Institute student (and awesome Quidditch player) Viktor Krum, who like Harry was a Tri-wizard Tournament contestant.

The dress piece used for Fleur and Dumbledore (see further below) was too high for a young teenage version of Hermione, so her dress is a 1×2 brick with printing on top of a plate. It works well, in particular from the front.

We also got Cedric Diggory and Fleur Delacour, the remaining two Tri-wizard Tournament contestants. Here, it would have been nice if the torso printing had continued on Fleur’s dress, but it still look fine without.

Finally, we got Albus Dumbledore and the very tall Madam Maxime, headmistress of the Beauxbatons Academy of Magic.

They are all made with detailed printing to look as they did during the Yule ball in the Goblet of Fire movie and they all look great. And it should be noted that the Beauxbatons arrival set includes Hagrid in his Yule ball attire too and the Professor McGonagall both in the 2018 Hogwarts Great Hall set and this year’s advent calendar (day 6) represents her dress at the ball well too. So you can expand of the party utilising these figures. 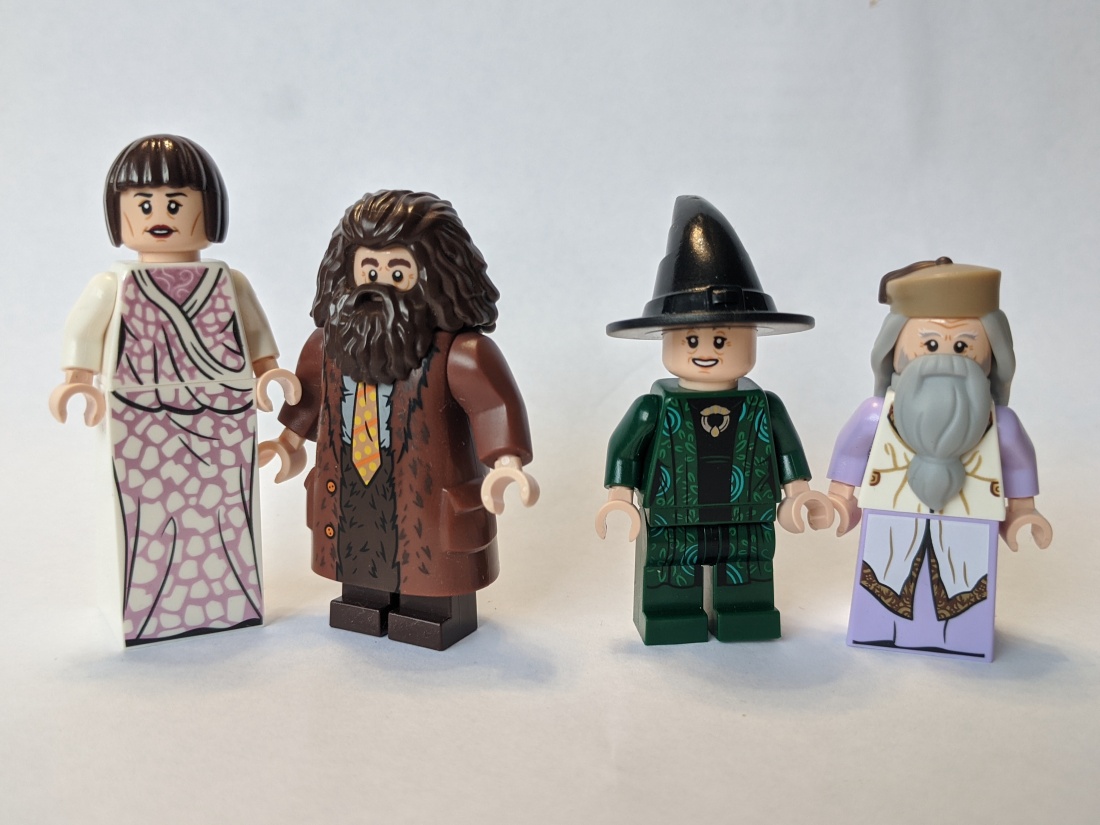 Overall, it’s a nice looking set with a good selection of rooms to cover the storyline in the third and fourth books (which are the focus of the 2019 Harry Potter sets). The minifigures look great too and I’m sure they will be popular around Christmas time, recreating the magical Christmas at Hogwarts.

However, I don’t find that the minifigures and the castle parts fit that well. There is a lack of minifigures to play/display in most of the rooms included. Personally, I think they would have been better off skipping the Yule-ball section, releasing it separately in a smaller set with some of the figures (with the remaining to feature in an Advent Calendar instead).

Instead of the Yule ball section, they could then have included the prison tower and minifigures like Mad-eye Moody, Moarning Myrtle, Sirius Black, Madam Pomfrey and Buckbeak.

As I do have my own bigger castle and was more after the parts and minifigures, it doesn’t matter too much for me though, and I think most will really appreciate the expansion of the castle you get adding this to the 2018 Hogwarts sets as well as the quality and quantity of the minifigures included.