I can’t believe it is already Christmas eve. I’ve just finished my review of the Clock Tower set with the wonderful Yule ball characters. But so much still to do today, so I’ll get straight to business. After 23 very good models (some absolutely amazing), what did we get here the last day?

Today we got an assortment of wizardy stuff. Probably Harry’s chest with a set of wands, a spell book, a bar of chocolate for his frequent encounters with the dementors, his owl Hedwig and probably my new favourite tile representing his Hogwarts acceptance letter. 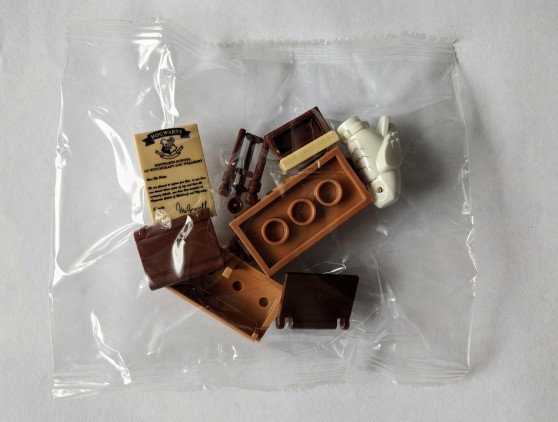 Compared to the printing you got a few years ago, you can now get some really detailed prints, and with a bit of effort you can make out the entire letter from Professor McGonagall telling Harry Potter he has been accepted to start at Hogwarts. I can understand that this is a letter he would be keen to save.

I think it would have worked better as the 23 December model and Dumbledore for 24 December instead.

Here I’ve set up most of the models. It looks amazing.

And with the Yule Ball figures instead from the Clock Tower set it looks equally stunning.

As noted, I’m not sure the assorted wizard things is the best thing to finish off with, but I really like the letter on the 2×3 tile and therefore award it 3.5 out of five House points.

It has been an awesome journey reviewing this. Now, I have a Christmas party to prepare for, so I better finish now.

Merry Christmas to all who followed me. I sincerely hope we’ll get another calendar I can review in 2020.

But till then, Build the Magic!

I love my Hogwarts Icons setup. The ticket is from the new Hogwarts Express set and Luna's glasses and the tall stand for there golden minifigures are from: https://blockwarts.org/instructions/ #blockwarts #harrypotter #LEGO #legoharrypotter #hedwig #legofun
Almost time! I've been looking forward to this for months! Follow our daily countdown to Christmas post on www.blockwarts.org
Happy Back to Hogwarts day everyone!
Ready for the countdown to Christmas? The LEGO Harry Potter Advent calendar review starts tomorrow at www.blockwarts.org #LEGO #adventcalendar #legoharrypotter #harrypotter #countdowntochristmas #blockwarts
Join 2,647 other subscribers