Finally back again posting after a crazy busy period. And finally, I’ve finished a LEGO creation I started on more than four years ago – the model it has taken me the longest to complete ever!

It started a long time ago. Back late 2013 I had displayed a smaller Hogwarts MOC at a LEGO Expo and planned a bigger one in late 2014. Somewhere in between, around June 2014, I thought it would be a good challenge to build a model of the Leaky Cauldron – and having just build the Pet Store modular house and Cafe Corner, building it in modular scale seemed like a good idea. So I found a few baseplates and outlined the building shape. A few layers of bricks later I ran out of bricks and the project stalled.

Later that night – well, its a start

The Leaky Cauldron is a significant location in most of the Harry Potter books, and it is by walking through this – and out the back door – Harry for the first time enters the magical world: the shopping street of Diagon Alley.

From the beginning, the plan was to have the building match reasonably close the actual location used in the Harry Potter movies. I only had a couple of black and white photos to work with from start, but enough to outline what it should look like (I much later went to London and saw the actual movie location as seen in the photos below, but that was too late to have any influence on the design). 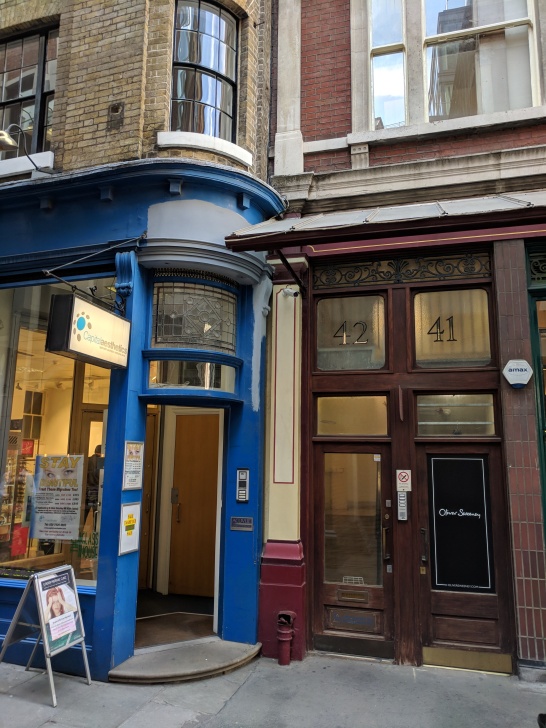 In the years that followed, the building was occasionally taken down from the top shelf and expanded, as I got more of the bricks I needed. After the 2014 display, my Hogwarts castle was packed away too, though I keep buying bricks for a future expansion. That expansion came early this year – which led to the creation of this blog. Along with the renewed interest in Harry Potter, my Leaky Cauldron suddenly started to progress a lot faster.

So in November, I could add the last bricks completing the model after more than four years of “building”.

While built to the scale of modular buildings, a key difference is that I kept one side open to show the cross-section of the Leaky Cauldron. The other side is closed as normal modular buildings. 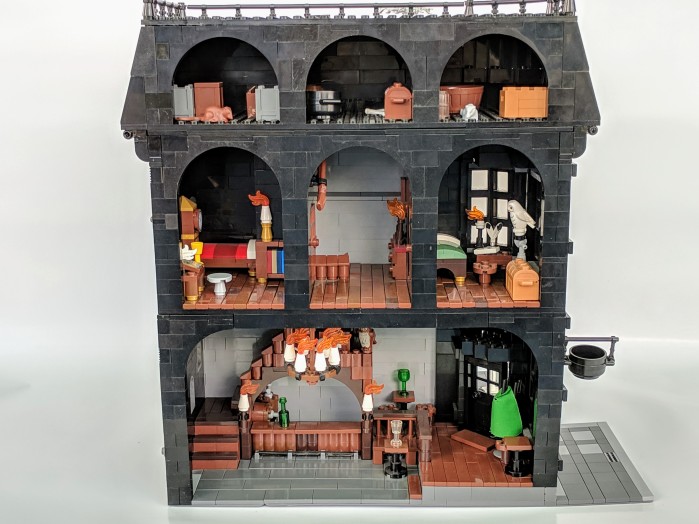 In order for the model to look like the actual building, I needed to move the Leaky Cauldron out a bit from the neighbouring building, This was done by adding a 8 x 16 baseplate in front (compare with photos of real building further above).

The neighbouring building had two doors right next to the Leaky Cauldron, and I assumed one would lead upstairs and one be the entrance to a ground level store. So that is what I built.

The ground level store became a butcher, complete with freezer room at at the back. Above it was an apartment with kitchen and living room on the first floor and toilet and bedroom on second floor. 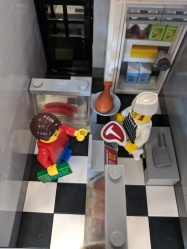 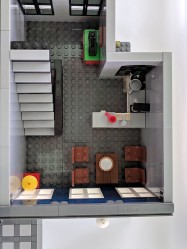 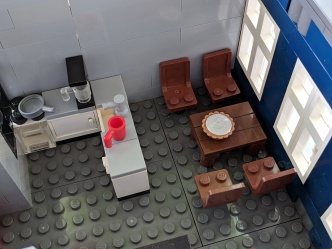 The Leaky Cauldron has the pub downstairs with the exit at the back for access to Diagon Alley. A staircase leads up to level 1 where two flats are available for rent, such as the one Harry stayed in after he was taken there by the Knight Bus in the Prisoner of Azkaban. Level 2 is a ceiling space with storage of crates, barrels and a few mice. 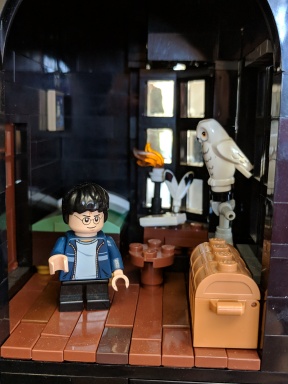 The model has been submitted to LEGO Ideas’ Magical Builds of the Wizarding World building contest. You can see the entry here.

I’m now thinking I better get started on Diagon Alley.

Till then, build the magic!

View all posts by Hindsberger

7 thoughts on “Leaky Cauldron: The entrance to a magical world”