Harry Potter’s first visit to Diagon Alley is when he first truly enters the magical world. It was therefore the theme of three of the sets that came out in 2002 and 2003. The fantastic 2011 Diagon Alley (set 10217) gave us some much improved buildings, but we still miss some of the most important ones. In this post I present my own version of one of these: the Weasley’s Wizard Wheezes shop.

Firstly it should be acknowledged that LEGO has made this, but in microscale (set 40289). 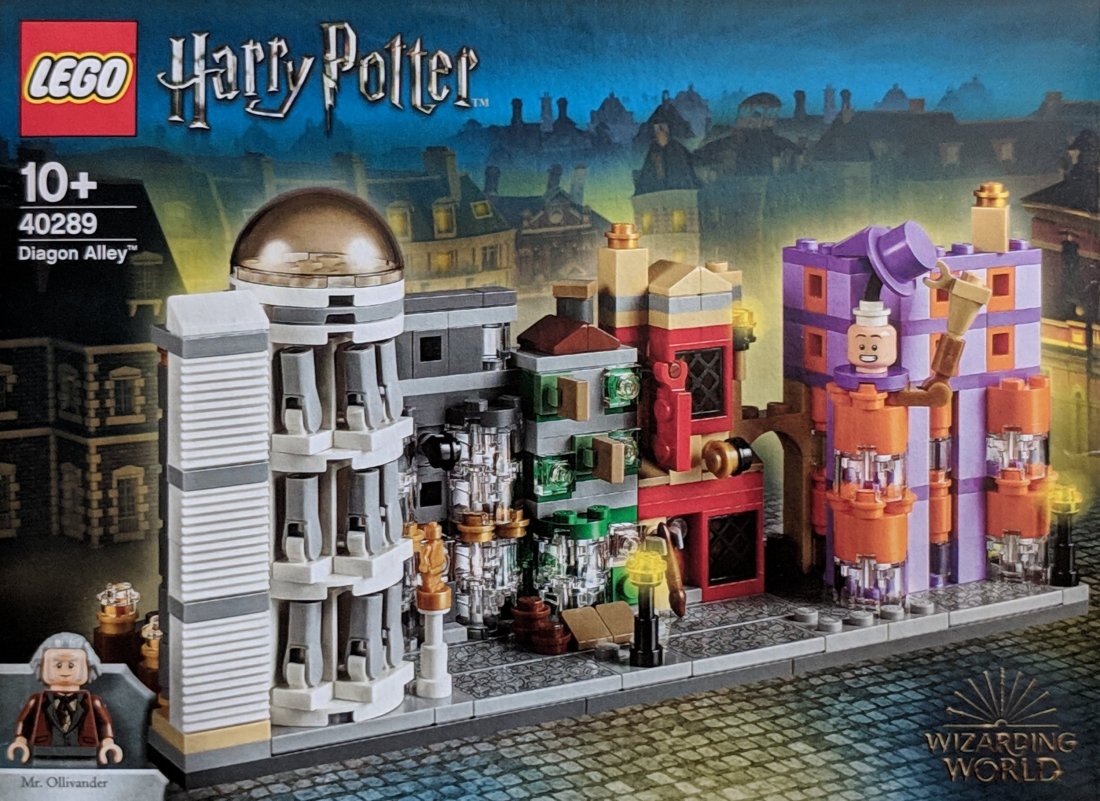 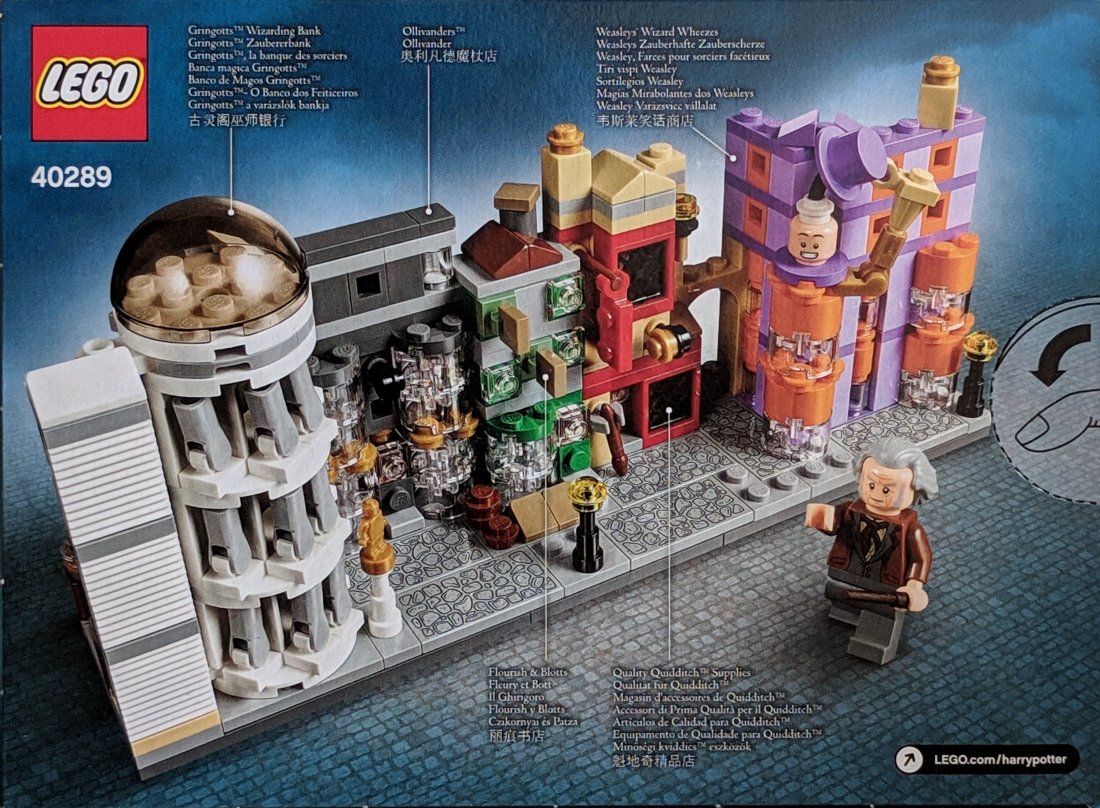 Fred and George Weasley loved a good prank and started selling jokes and prank stuff by post order in the beginning of Harry Potter and the Goblet of Fire. Mrs Weasley was not pleased and had burned all their post order forms when she found out

To get money to open a real store, they secretly bet on the outcome of Quidditch World Cup. They were lucky and were to make a lot of money, but Ludo Bagman paid them with Leprechaun gold (fake gold).

However, Harry finally lend them the prize money he won in the Tri-wizard cup as seed money. With this money, they eventually (having left Hogwarts during the school year in the Order of the Phoenix) did open a store at Diagon Alley.

Getting started with the model

Most of 2018, I worked on my very large model of Hogwarts. Having finished that around October, I started on a number of smaller models, including the popular chocolate frog wizard cards, and a modular building scaled version of the Leaky Cauldron.

With the Leaky Cauldron being the entry to Diagon Alley, building something from there was a natural extension.

I had seen Diagon Alley at Warner Bros. Studio Tour – The Making of Harry Potter in London last year. Walking down Diagon Alley, the Weasley’s Wizard Wheezes shop stood out as something special, really catching the eye. So it had to be that.

I ordered some bricks to get me started building the store, having a broad idea within my head. Soon after, rumours emerged that there would be an upcoming big Diagon Alley LEGO set, which would include Weasley’s Wizard Wheezes shop.

I put the idea on hold, but eventually it seemed rumours were driven by the microscale set and with packages of bricks from around the world arriving, I thought I better get started again.

It was mostly complete by January, but the final touches has taken a while as I’ve been involved in a number of other LEGO projects (Ghostbuster and LEGO Movie 2) that took much of my time. However, now the model is as good as finished.

Picking the right colours are always difficult. Based on the building I saw in London, I settled on using medium lavender and dark orange as main colours with windows/doors in reddish brown and some detailing in dark purple and black. A few dark tan bricks are used to make the building look worn.

I wanted to build in broadly in the same scale as the buildings that came in the 2011 set, and as them have open backs, so the interior can be viewed. As for the figures of Fred and George, they luckily came with the 2011 set.

I’m overall very happy with how the exterior looks, in particular the brick build face of the man in the corner window.

At this stage, the interior is not quite as complete as the exterior, but reasonably shows the different kind of things you would expect to be able to buy, including a large section of fireworks (of course). 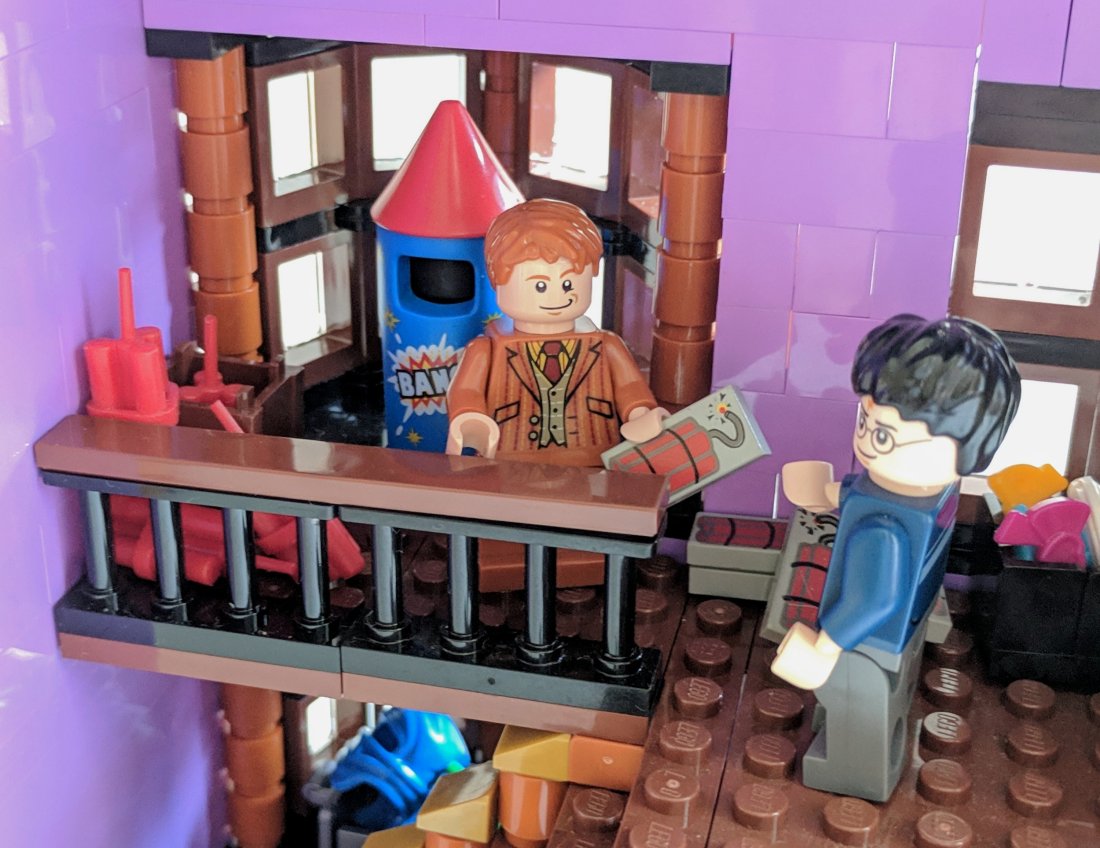 In addition, you can buy all kind of joke equipment… 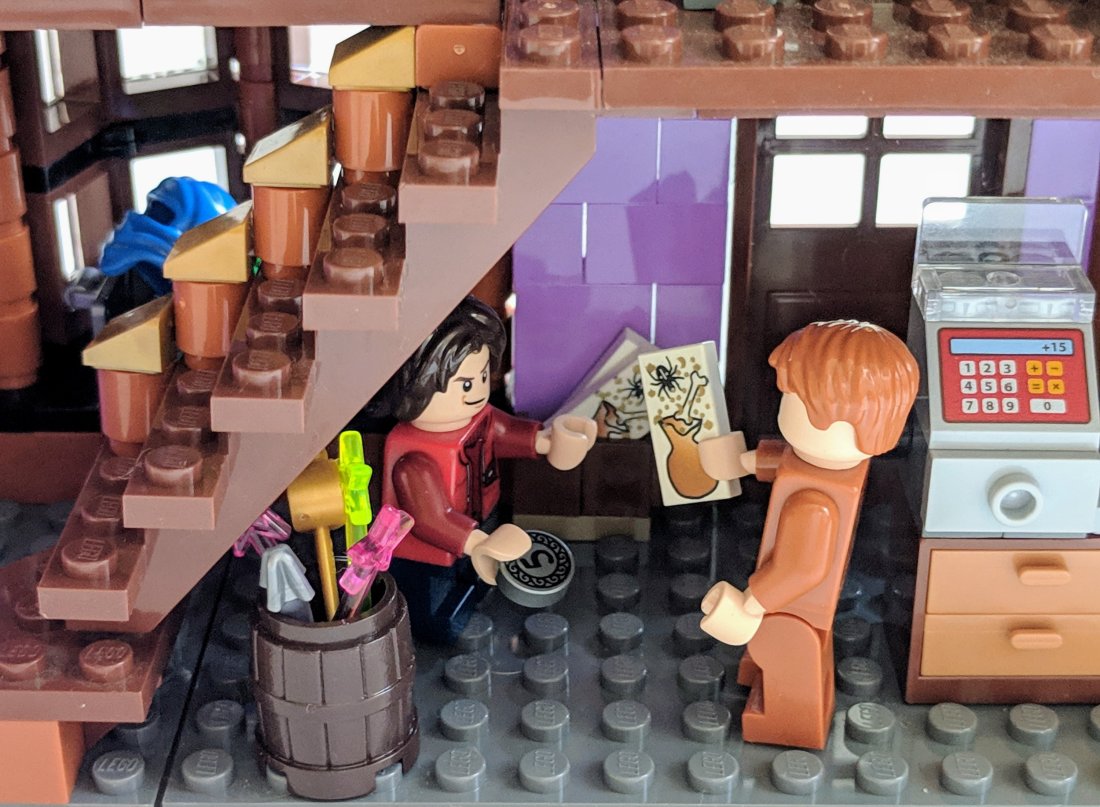 There are also slingshots and a net. I’m sure these can be used for naughtiness. 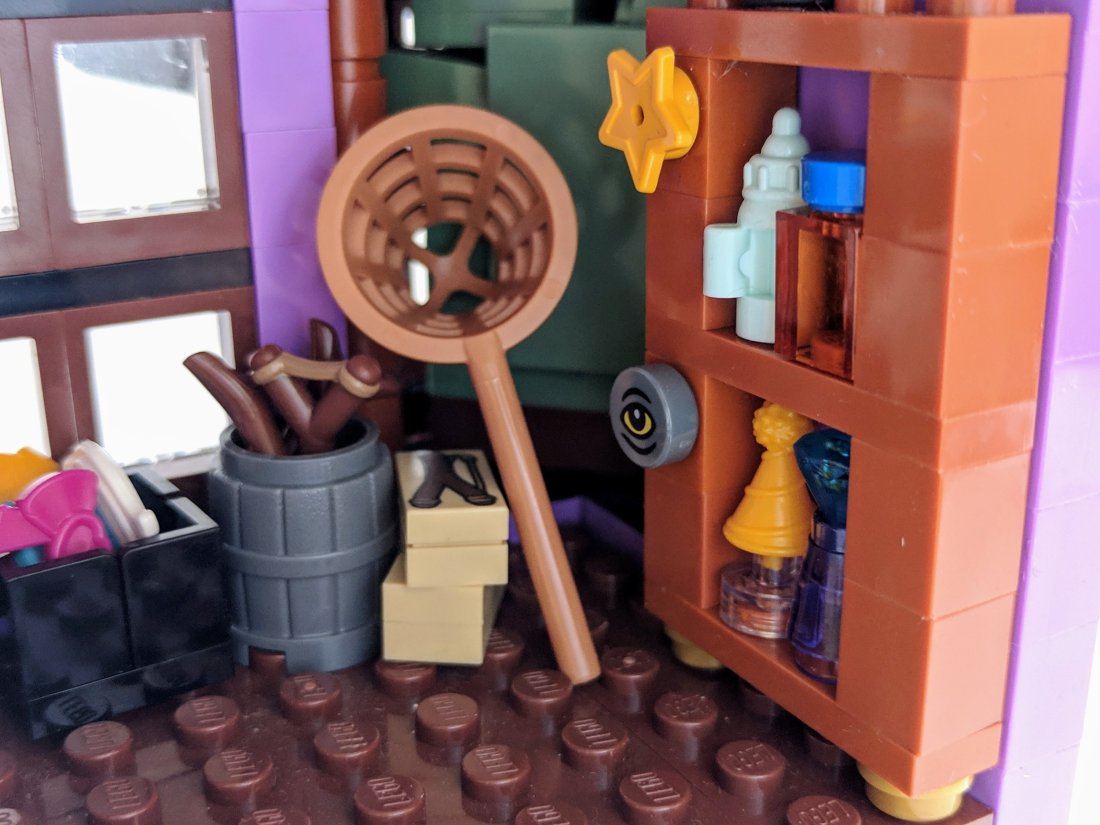 I’d like to add a bit more over time, but for now I’m pretty happy with it. 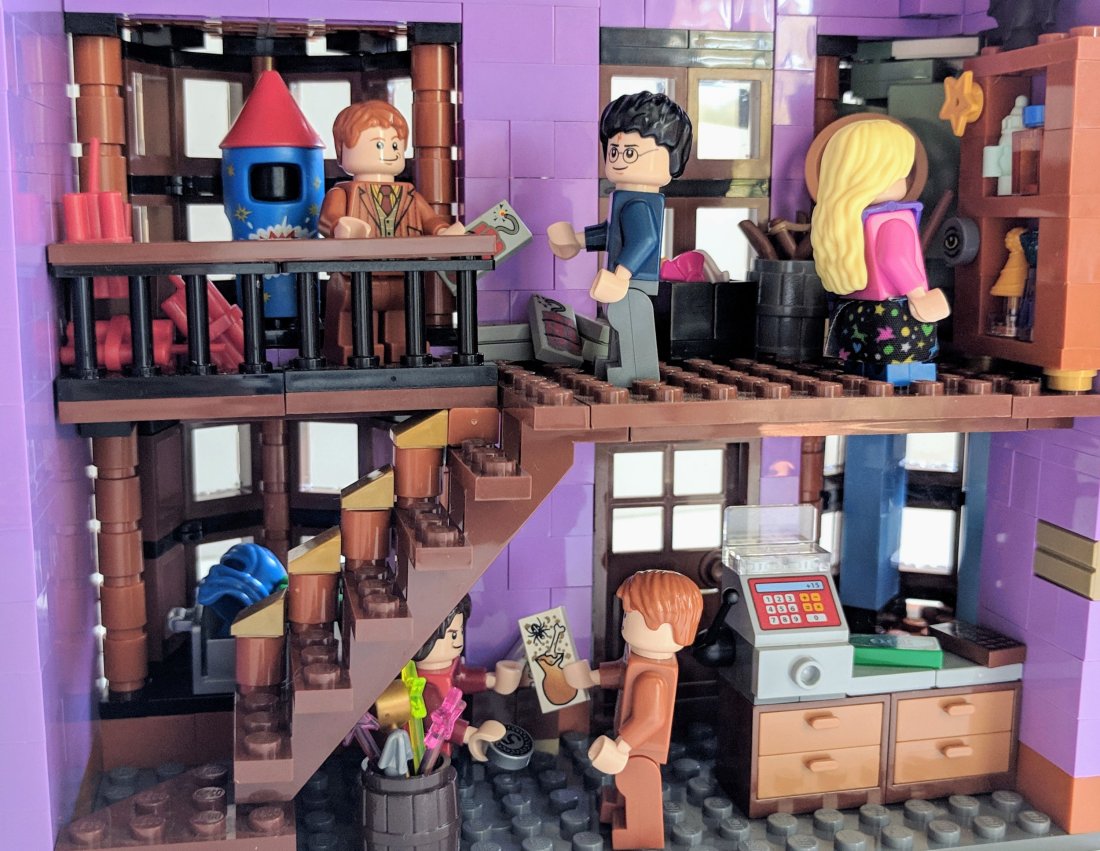 Others have built bigger models with much more detail, such as Eric Law’s fantastic model show below:

There are plenty of other Diagon Alley buildings to get started on. A full list of shops mentioned in the books, show many additional opportunities:

So far, we have seen official sets with the following shops (noting Burgin and Burkes is actually located in Knockturn Alley):

Decisions, decisions, what to do next…