As follow up to the LEGO Weasley’s Wizard Wheezes MOC I did early in the year, I’ve finally completed my next Diagon Alley model: the Flourish & Blotts bookstore. As a book-lover I really wanted to build this one – and also because it was one of the shops covered in more detail in the books. It will be part of a larger Diagon Alley display eventually (also to feature my Leaky Cauldron model) I’ve got planned. The following may hint on what’s coming next.

As I did with my Weasley’s Wizard Wheezes model, I did a bit of research first, to see what the store looked like in the movie. I normally won’t follow that strictly, as that is only one representation of what the bookstore could look like, and all that have read the books first, would have created their own versions within their heads, which are just as fine.

Last year I visited the Harry Potter Studios in London where the movie was shot, and I must say the Weasley twin’s shop stole the scene, but just to the left (a bit closer to the camera on the photo below) is Flourish & Blotts with the rather dark bay window.

Here’s a photo I took of the store front itself. The key feature found on this (and the neighbouring building) is the large bay window at ground level, with the entry door to the right and a couple of windows one level up.

Then I started building. For colour-scheme, I went with light bluish grey for the walls and dark green for windows and door. Unfortunately, the door doesn’t come in dark green, so I had to use a brown one for now. I hope a dark green one will come in the next few years.

Below is an early concept trying the stonework and the bay window in particular. It was hard to get a decent shape. The sign above the door was using a few spare “book” tiles I had. There was no such sign in the movie, but it looked good, so I kept it there.

Here, the model has progressed. I’ve even started on the neighbouring building. Those who have visited Harry Potter studios may know what’s coming next 🙂

Initially I had planned to make two similar sized windows on level 1 as per photo above, but changed my mind to have the left one being wider than the right one in the end.

Here is the final model as seen from the front. I’m very happy with the stonework (including use of old discoloured light grey bricks) and the roof made of cheese-slopes.

This photo, seen from an angle, shows the side of the model, which will front out to a small passageway running between it and the Weasley’s Wizard Wheezes shop.

The inside has just as much detail as the outside. Being only 7 studs deep, and most of the long wall taken up by the bay window and door, there is limit to how much you can add, but with a ladder to a small office space one level up, and a couple of bookshelves at ground level, hopefully it does look like a bookstore.

Here are some more photos with a better view to at least one of the bookshelves (there is also one behind the door), but more importantly also showing the book-signing event Professor Lockhart had in Harry Potter and the Chamber of Secrets. All the ladies have lined up to get his signature – Molly Weasley is in front. 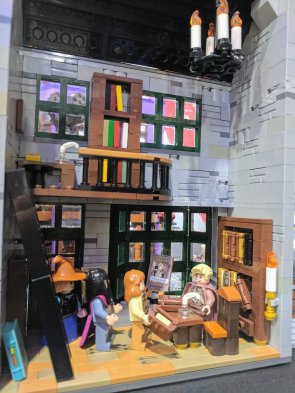 This weekend I brought both the Weasley’s Wizard Wheezes store and Flourish & Blotts along for a public display. It was first time they got shown to the public and they loved the detail (luckily).

The photo below is from that setup, but it should be noted that the location of the buildings will change as I get more of them completed.

The Gringott’s bank in the back is the unmodified one from Diagon Alley (set 10217). Ollivanders (from that same set) is up for an upgrade to make it slightly bigger. But first addition will be something for the sweet tooth.

I’ve added the link to this post and any other post that describes a specific location in the Harry Potter universe to my new locations page for easy reference in the future.

Better get on with the next model – though all the new 2019 Harry Potter sets need some attention too.

Till next time, Build the Magic!

10 thoughts on “Flourish & Blotts – A heaven for book-lovers”