Long, long overdue, but with no new sets in sight (yet, rumours remain strong), I better continue the (non)-review of the Harry Potter collectible minifigure (CMF) series. My two previous posts on this focused on the Gryffindor students (see part 1 and part 2). This post takes a look at students from the other Hogwarts houses, with all remaining three of them being represented in the series.

From Hufflepuff, we have Cedric Diggory, from Ravenclaw we have Cho Chang and Luna Lovegood, and from Slytherin, we have Draco Malfoy.

Let’s start with Hufflepuff. Amazingly, 2018 was the first time we had a Hufflepuff student released as official minifig. It’s therefore the first time we see him Cedric in minifig form. Another Hufflepuff, Susan Bates, was included in the Hogwarts Great Hall (set 75954).

Cedric was Captain of the Hufflepuff quidditch team and a key character in Goblet of Fire. He was introduced to Harry during the Quidditch World Cup by his father Amos Diggory, who like Arthur Weasley worked at the Ministry of Magic.

Cedric was one of four students to compete in the Tri-wizard Tournament and the CMF shows him dressed up for the competition and with the trophy, the Goblet of Fire.

The names of the Tri-wizard Tournament contestants were drawn from the goblet at the Halloween party at Hogwarts. To everyone’s surprise there was more than three names.

The printing matches that if Harry Potter set Graveyard Duel, allowing you to complete that sad final scene of Goblet of Fire at the graveyard.

Luna Lovegood was started at Hogwarts one year after Harry Potter and was sorted into the Ravenclaw House. She’s not really part of the story till Order of the Phoenix, but as an active member of Dumbledore’s Army she plays a key role for the remainder of the books, and it is therefore fully appropriate to see her included in the CMF series. The figure comes with two facial prints, one normal and one with her wearing spectrespecs. These were a kind of large, colourful spectacles that were given away free in an issue of The Quibbler magazine (which her father was publisher of). They allows the wearer to see wrackspurts, which is an invisible creature that floats into a person’s ears, making his/her brain become unfocused. I think there are a lot of those things around… 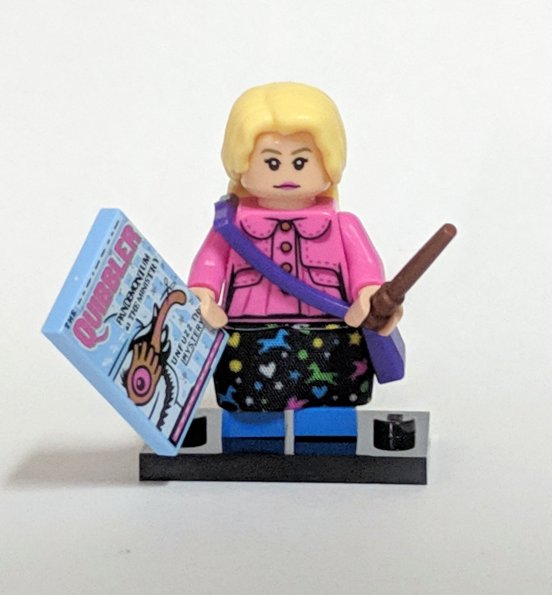 Luna has only once before been released as minifigure (with the 2010 Hogwarts Express train set 4841) and given her popularity, this figure is highly sought after (read “expensive”). Unfortunately, this CMF version captures her in exactly the same outfit, though that is so characteristic for her, that doing anything else may have been considered boring. The cloth skirt and the much better printed Quibbler magazine are the main things differentiating the two versions.

A quick test to recreate the train scene, where Luna is wearing the spectrespecs in the Half-blood Prince, proves that it is hard to have the figure sit down due to the cloth skirt.

Another Ravenclaw included in the CMF series is Cho Chang. Cho started at Hogwarts one year earlier than Harry and played on Ravenclaw’s quidditch team. It was on the quidditch pitch in Prisoner of Azkaban that Harry first saw Cho. He noticed she was very beautiful and she became his first crush, with him becoming bright red when she spoke to him.

The figure comes with an owl, which is great as the colour is new for an owl – and as one of the most memorable scenes in the Goblet of Fire movie is when Harry meet Cho in the owlery and – struggling to control his voice – asks if she wants to go to the yule ball with him. Their first date would however had to wait for the following book (see my post on Valentines Day at Hogwarts).

Draco is one of the key characters in the Harry Potter books and the one that has been made into most different Minifigure versions (8 versions came with the sets released between 2001 and 2011) apart from the Gryffindor trio Harry, Ron and Hermione.

The snitch is a welcome accessory though also found in the 2018 Quidditch set 75956.

This figure is indeed a perfect addition to the Quidditch match set, which included two other Slytherin players that came with.

Interestingly, writing up this I realised the CMF series include quidditch seekers from all four Hogwarts houses. Harry was obviously playing that role for the Gryffindor Quidditch team from his very first year at Hogwarts. As discussed above, Draco was seeker on the Slytherin team, Cho played seeker for Ravenclaw and Cedric was seeker and captain for the Hufflepuff team.

We have yet to see official versions of Hufflepuff and Ravenclaw quidditch robes (hopefully we’ll see that one day).

There are however custom ones like like those made by Potterbrick shown below (similar to the 2010 design in Quidditch Match set 4737).

Imagine if LEGO would release something similar. With these nice looking custom quidditch robes, I’ll finish this part 3. Hopefully I’ll soon be too busy discussing upcoming 2019 sets than write a part 4.

Till the, build the magic!

7 thoughts on “The other Hogwarts houses – a non-review of the Harry Potter CMF Series, Part 3”