There are some new (minifig) kids on the block. The new Harry Potter Collectable Minifig Series (CMF) has brought us stunning minifigs bringing much improvements over the figures released with the 2001-2011 era Harry Potter sets and in particular when comparing with the first years where yellow heads were used.

This is not a review – at least not in its normal sense.  There will be plenty of such reviews already available, listing the awesome prints, superb new hair pieces and great accessories found with most figures.

This non-review will look at the three main characters: Harry, Hermione and Ron. They all come with the animals they brought to Hogwarts, where in particular the new rat mould for Scabbers is a great improvement over what we had previously. The Printing show them in their Gryffindor robes and the detail is amazing. They look perfectly like the characters in the movie. 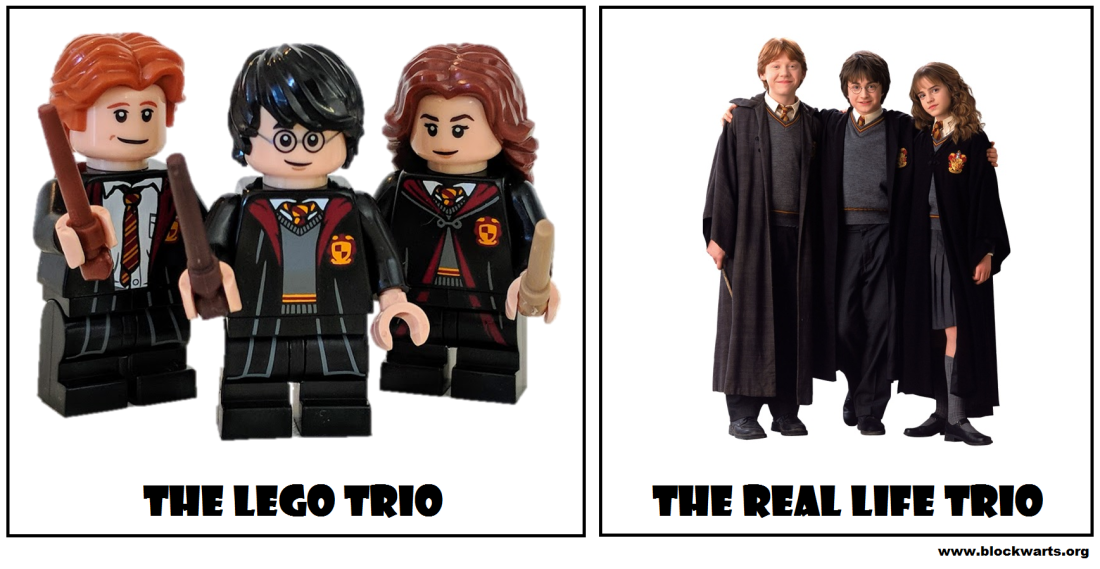 A normal review would have continued talking about the new wands, the lack of dual face printing (would have been nice) and not least the introduction of “teenager” sized legs. These fill the gap between the kids legs and the adult legs, with one plate difference in height between the three sets of legs. And most importantly for incorporating these figures into your displays, the new teenager legs are poseable. More about this later.

The reason this was not meant to be a traditional review was some of the feedback I got from the first review (Aragog’s Lair). While generally positive, it highlighted that what I could do to make it special was to take the figures and sets and incorporate into the 96 baseplate Harry Potter display we have. So here we go…

Troll on the loose revisited

Professor Quirrell came sprinting into the Hall, his turban askew and terror on his face. Everyone stared as he reached professor Dumbledore’s chair, slumped against the table and gasped, “Troll – in the dungeons – thought you ought to know”.

He then sank to the floor in a dead faint.

The subsequent scene where Harry and Ron takes on the troll in the bathroom to save Hermione is one of the most memorable from the Harry Potter and the Philosopher’s Stone movie, and was the theme of one of the first Harry Potter sets Troll on the loose (set 4712) from 2002.

The set did have a troll, and did have a bathroom (represented by a single tap with sink), but only included Harry, most likely to keep the price point low. No Hermione to save and no Ron to finally get the Wingardium Leviosa spell to work. Still, for kids back then the set would have had a high play value, and the introduction of the troll was notable being one of LEGO’s first big figs (see a comprehensive write-up about the innovation in minifigures LEGO Harry Potter has given us at the Rambling Brick). While better representing a mountain troll than a minifigure would have, it looks inadequate by today’s standards. It only had articulation of the right arm, and the head (which looks tiny on the large body) could turn.

The cave troll from the Lord of the Rings set Mines of Moria from 2012 (set 9473) looks so much better and scarier!

I will finish this non-review (which probably ended up being less a non-review than I thought) with showing a modern version of the Troll on the loose scene. In preparation for the next display of our Hogwarts, this scene has been added using the new figures from the CMF series (including Ron and Hermione) and the mean looking cave troll from Lord of the Rings.

It shows the moment when Harry jumped up the back of the troll to save Hermione, after the troll had knocked down most of the walls separating the toilets. The articulation of the teenage legs help posing the figures for the scene. For Ron and Harry, their heads and hair pieces from Aragog’s Lair was used to have them look scared.

7 thoughts on “New kids on the block – a non-review of the Harry Potter CMF Series, Part 1”